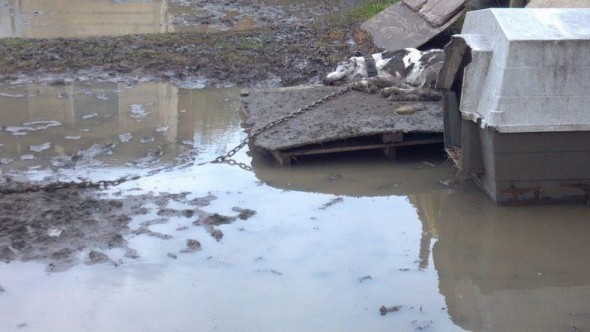 A Harlequin Great Dane named Ellie Grace lived a life wherein she knew only suffering.  She was confined to a heavy chain, surrounded by a stagnant water and mud pit.  Every day was the same, and there was nothing to look forward to.  Her bed was a muddy wooden board.  But now when she lies down it is on a warm, soft bed.

This is all thanks to Helping Animals Reach Tomorrow (HART).  When they found Ellie Grace, she had lay down and given up on life.  She was too depressed and hopeless to eat, or even stand.

HART rescuers asked her owner if they would consider surrendering her, and they said yes.  Ellie Grace was unshackled and immediately whisked away.  Away from a life of filth and solitude, and into a new life of comfort and love.

For the first time in her wretched existence, people bathed her and made a fuss over her.  When she was clean and dry, she was allowed to rest her aching bones on a nice, fluffy couch.  She was introduced to other dogs.  In her past life, she could only see dogs while tethered.  Now she can sniff and play and frolic with them. 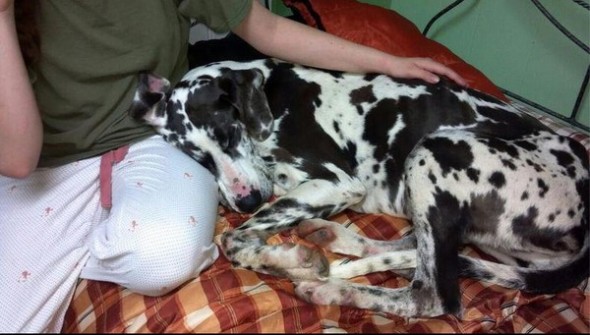 In addition to liberating Ellie Grace, HART also educated her former owners on how destructive it is to leave dogs tethered.  Thankfully, the former owners were happy to be enlightened.  The other dogs on the property were released from their chains and given kennels with soft hay inside.

In Louisiana and Mississippi it is common for people to chain their dogs, and most residents don’t see it as harmful – it is just their way of life.  These dogs often have just enough slack on their cables to lie down, so they are surrounded by their own waste.  They aren’t even sheltered from the blistering heat, driving rain or bitter cold winters.

HART volunteers rely on donations so they can continue their heroic work of unfettering dogs from their chains and owners from their mentalities that dogs are property.   At Life With Dogs we know that our fans would never treat their dogs in this manner, but we need to band together and spread the word to those who do treat their dogs like this.  Animal abuse comes in all forms.  If it’s a condition that you would not be comfortable in, it’s safe to assume that a dog wouldn’t like it, either.

Ellie Grace is doing wonderfully now that she has been adopted by HART rescuers Cappy and Alexa Jeffers.  She is thriving and enjoys playing with her new siblings. 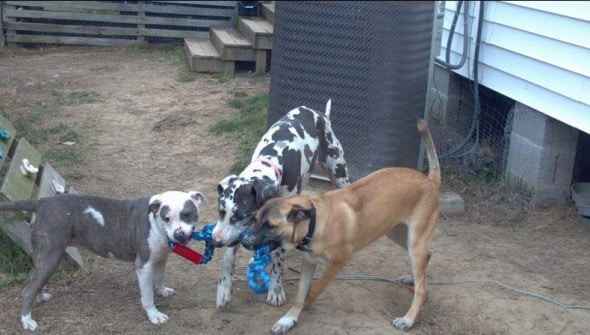 HART’s and Ellie Grace’s Facebook pages can be visited at: