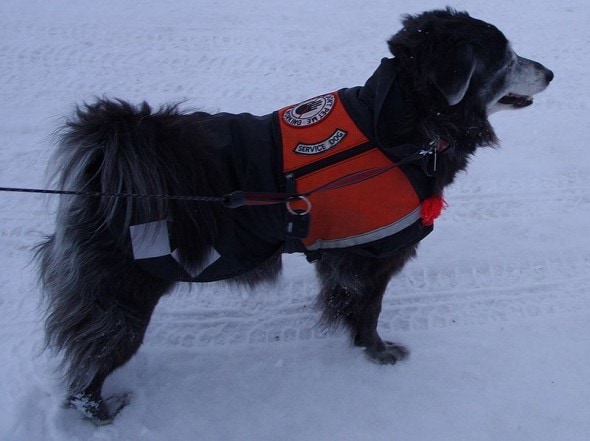 Austin, Texas — The Texas House of Representatives has made a major move forward in helping military veterans.  On Wednesday, May 1 they passed a bill allowing military veterans with post-traumatic stress disorder (PTSD) to have service dogs. The bill passed by 120-21 vote and was put forward by Representative Jose Menendez (Democrat – San Antonio). It has moved to the Texas Senate for approval.

The bill expands the kinds of veterans who can get service dogs.  It also guarantees that the dogs are allowed into restaurants and food stores. The penalty for discriminating against a disabled person would be $300 and require community service.

Even as the Texas legislature moved forward, however, there was some concern that the new legislation would make it harder to keep non-service animals out of businesses. Some lawmakers debated how hard it would be for restaurant and other business owners would get into trouble, facing criminal penalties for blocking service dog entry while attempting to verify that an animal is being used to assist a disabled person.

While moving forward in opening doors to dog-assisted humans, the legislature continued to drag their collective feet in service rights by including an amendment that ONLY DOGS could enter public places as service animals. No other animals would be approved

Also, it passed with an amendment clarifying that only dogs — not other service animals — can gain access to certain public places.

Veterans with PTSD suffer from anger and irritability, social withdrawal, startle responses from sudden movements and noises, depression, nightmares, extreme anxiety and panic attacks and other life-disturbing symptoms. PTSD service dogs help veterans afflicted with PTSD by accompanying their humans into public places and other social interactions, helping keep their humans calm by putting their bodies into between them and other people and other ways that help their humans deal with daily life events that most people take for granted.

Kudos to Texas for helping men and women who very much deserve to receive any help they need in recovering from serving their country! These folks walked into danger and gave what was required to fulfill their vows. It is well known and documented that service dogs are extremely effective.  The least we can do for our veterans with PTSD is match them up with dogs who can make their lives better.