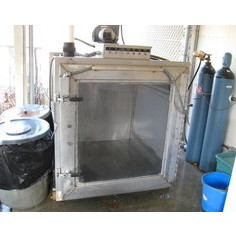 Texas has taken a major step forward. As of May 10th Texas animal shelters may no longer use carbon monoxide gas chambers to euthanize dogs and cats. That was the day Governor Rick Perry signed the bill, SB 360, into law. In a time when legislators rarely agree quickly on any legislation SB 360 zoomed through both the Texas House and the Senate with no dissenting votes.

Gas chamber euthanasia had already been outlawed in 30 Texas counties but this means that no dogs or cats will have to face what experts agree is an extremely cruel method of euthanizing animals. Instead, the accepted means of euthanasia will be sodium pentobarbital injection (also called euthanasia by injection or EBI). Animal advocates say that EBI is the most humane form of euthanasia.

Animal care advocates have long decried gas chamber euthanasia as a terrible way for a dog or cat to meet his death. Animals are locked in a chamber with other loose animals. They can smell the death and fear, causing them to fight to avoid the chamber when taken in and panic horribly once they are locked in. The death is relatively long and painful. Animal shelter employees suffer potential physical harm from both panicked animals and leaking carbon monoxide gas. That does not even account for the emotional pain they experience as part of the process.

EBI injections are more expensive than the wholesale use of a gas chamber but it is much more humane and allows for a less painful, more peaceful death.

6 thoughts on “Texas Outlaws Gas Chambers for Dogs and Cats”