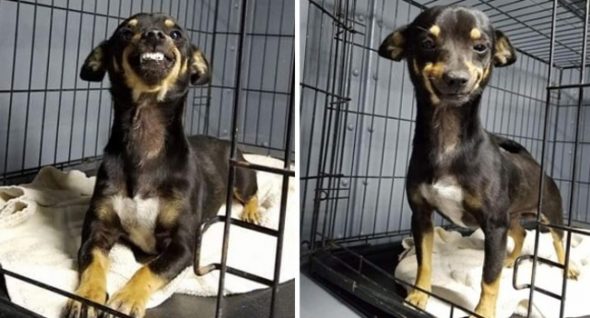 When Cheech arrived at the City of Waller Animal Shelter and Rescue in Waller, TX, volunteers immediately noticed his special skill.

“Busy day today… we got 3 adopted over the last week and a half. And we got 3 more in today alone.
At least we got this guy in, he’s super sweet and knows how to smile when you ask him to…!” it read beneath a Facebook post of the grinning pup.

With his winning smile, he soon became an Internet sensation.

Shelter Director Leah Sipe (also a Waller police officer) told FOX13 that some of the staffers thought Cheech was snarling at first, before realizing he was just saying “cheese” in his own, adorable way.

The photos of Cheech were shared thousands of times, generating lots of interest. Eventually, the shelter settled on a family they thought was ideal. 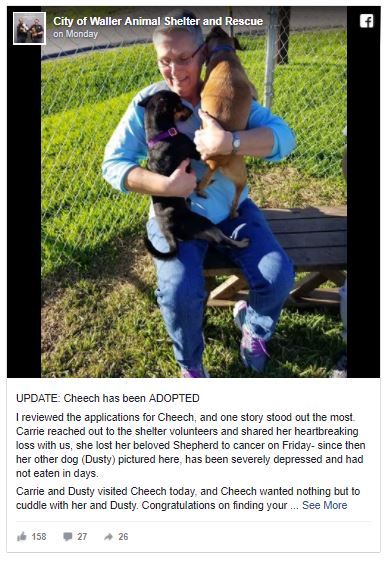 “I reviewed the applications for Cheech, and one story stood out the most. Carrie reached out to the shelter volunteers and shared her heartbreaking loss with us, she lost her beloved Shepherd to cancer on Friday- since then her other dog (Dusty) pictured here, has been severely depressed and had not eaten in days,” the rescue posted on Facebook Monday, along with a photo of Cheech meeting his new family.

Cheech, the post observed, needs this family as much as they need him. Nothing but smiles here today y’all!,” continues the Facebook update. 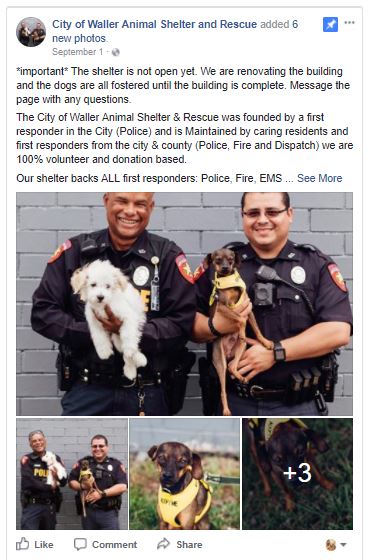 Of course the City of Waller Animal Shelter and Rescue still has lots of other wonderful animals available, so be sure to check out their website. The rescue was actually founded by a first responder on the city’s police force and is maintained by fellow first responders and volunteers from the community. The shelter’s current home, an oil jail, is under renovation, so all of the animals are living with fosters for the time being. It is the first and only no-kill shelter in the area and they are hoping that Cheech’s story spreads the word about the rescue so they can help many other animals just like him.