It’s a fun tradition for a very serious job, and in increasing numbers, our nations lawmakers are realizing the benefits of canine companionship in the workplace. 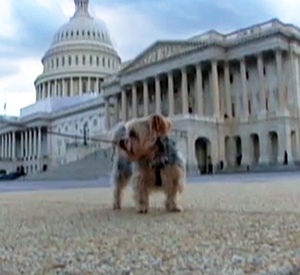 You may be surprised to learn that each day, dozens of dogs arrive at the United States Capitol building to spend their days on the job, alongside their masters.

Congressman Jerry Lewis, R-Calif., walks his dog Bruin from his home to his nearby Capitol Hill office every morning.

“When he arrives he kind of takes over the place. Wanders from room to room, says ‘hello’ to his friends,” Lewis says. “Often (he) lies out in the couch in the living, in the front office.

The congressman says that constituents and other members of Congress appreciate the opportunity to interact with dogs in what is otherwise a very stressful, contentious business.

“No doubt that an animal like this tends to calm people,” he said. “The real world is that we deal with intense challenges all the time but it’s awfully important to keep somewhat in perspective. Whenever I am frustrated about how to figure out what are the questions to be asked,” said Lewis, “well, I just look at Bruin and he says ‘take it easy dad, no big problem’.”

Democratic Sen. Kent Conrad is also a proponent of dogs in the workplace. His dog Dakota is one of the most famous dogs on the hill, and Conrad says that having his best friend to lean on makes his very stressful job a little easier to bear.

“This place is so intense to have somebody that’s just affectionate,” Conrad says of his dog, “he’s happy, he’s not affected by the latest controversy over the budget or the cuts were making someplace. He’s happy every day.”

Senate Historian Donald Ritchie said the tradition of bringing dogs to work on Capitol Hill dates all the way back to the 19th Century, when members of Congress and their hunting dogs were often seen on the Hill.