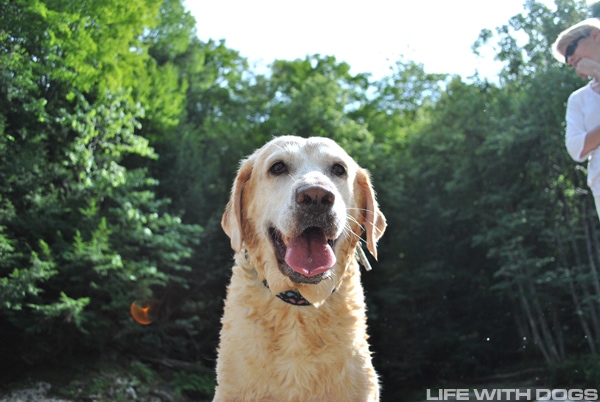 We’ve had many, many dogs over the years, and have experienced our fair share of medical maladies. From seizures to lacerations, encephalitis to pancreatitis, and everything in between, our vets have seen our dogs for so many emergencies that we have lost count. We’ve seen it all – or so we thought…

Last week sucked. In addition to the usual work stresses that consume me between weekends, I was sleep deprived and worn out from a few extraneous projects that managed to eat every minute of my time. I was in the middle of preparing a presentation for an upcoming speech one evening when I noticed that Sola was itching herself relentlessly.

As some of you know, she suffers from seasonal allergies that make every summer a challenge. A good one minute itching session is not uncommon when things get bad, but it seemed much longer than that by the time I closed my laptop and kneeled beside her for a closer look. It only took a moment to locate the object of her claws’ desire: a small, dime-sized patch of fur was missing from her neck.

Parting her fur, I looked closely at the exposed skin and noted no abnormalities. I resumed my work and Sola’s focus shifted to toys, tennis balls, barking for a chance to go out. She was back to herself, and by the time my head hit the pillow that evening, the matter was entirely forgotten.

The harsh light of day brought an unpleasant reminder. That dime-sized patch of missing fur had grown immensely overnight: it was now three inches wide, six inches long and oozing. It looked like she had been mauled by a bear. And she couldn’t leave it alone: I drank my coffee while grooving to the rhythmic thump of hock against floor as that back leg reached around for another swipe, taking tufts of fur with it each time claws met skin. It was nasty.

My wife and I were terrified. She scrambled to call the vet while I wiped away blood. While she waited on hold we exchanged guesses about what we were dealing with. We narrowed the list to two : an ultra toxic spider bite, or some exotic flesh-eating bacteria. After the vet confirmed an appointment I rushed to work for a critical meeting, planning to meet my wife when she arrived at the vet two hours later.

My meeting ran late. I called my wife the moment I was out, my hands shaking as I dialed while pulling on my seatbealt, fully prepared for a reckless driving style race to the vet in order to see my dog before whatever was consuming her actually did. I had forgotten that cell phone reception at our vet was spotty. When her voicemail answered I floored it.

I won’t say how fast I drove, but I managed to reach the vet in half the usual time – not bad for a fifteen mile trip. My usually blaring stereo was silent as I drove, my thoughts consumed with my beloved dog and the fear of losing her. I jammed my car into park before it even came to a stop in the parking lot of the vet’s office, running into the building and pushing past customers as I sought out my hurting pooch.

My wife met me in the lobby. She was smiling. That was all I had to see to know that things would be ok, but I was dying to find out what was behind the scare. What bizarre bacteria or rare virus was responsible for this terrifying medical mystery? When I asked, she paused for a moment before bursting out in laughter. “Everything’s going to be fine,” she said. “The vet feels really bad about the fact that we were so scared, because it’s just a hot spot.”

Part Two: Why I Hate Scones by Sola the Dog

Ok so we’ve established that my two legger is a moron, so let’s forget about him and talk about me, because now that he’s relieved my life sucks. Know what vets give you for hot spots? I do and it’s evil. I was feeling pretty good when the vet told my lady two-legger that it was just a hot spot that was making me itch like mad, but I was about to suffer the worst fate a dog can endure.

“Hot spots are relatively easy to treat,” the vet said to my lady two-legger. “All we’ll need is a course of antibiotics.” That didn’t sound so bad. But then he turned to me and bent over with this big plastic thingy, reaching over my head as he told me, “You miss itchy, you will need to spend the next week wearing this scone.” Yep, I’m pretty sure he said scone.

Ok, I’m not the sharpest knife in the drawer, but my only previous experience with a scone was pretty awesome: my clumsy two-legger was eating a ham and cheese one when a piece broke off and fell on the floor. I’ll never forget that magical combination of cheese and eggs and butter and pork and all of the other killer noms I never get to eat. It was culinary nirvana. 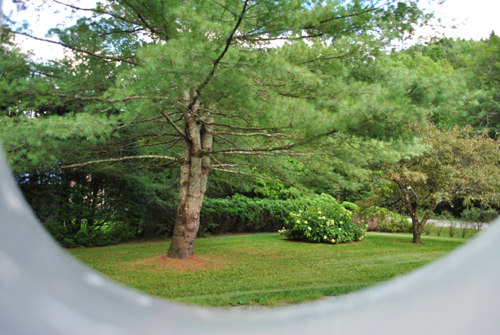 Apparently, the place that makes ham and cheese scones does NOT make the plastic ones. This thing was either made by Satan or a bunch of cats. It’s a torture device, plain and simple. In addition to the joy of tunnel vision, I know have the pleasure of knocking into everything remotely near my path, including human shins: truth be known, I speed up whenever I see one of those coming. They deserve it.

Of course, the loneliness is the worst part. Nigel and Truffles are looking at me like I’m an alien, and they run when they see me coming for fear of getting whacked by my swinging scone. In other words, I’m living the dream.

I must admit that it’s not all bad. Treats thrown my way are pretty much guaranteed to be caught, and I’ve begun to notice other scones that kind of resemble me. You can see one of them in my wordless Wednesday picture this week, but check out a few examples that I’ve found. 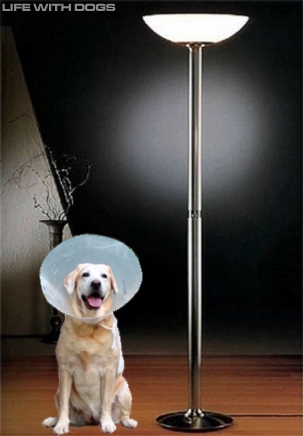 Makes sense: It’s been said that I light up a room when  I enter… 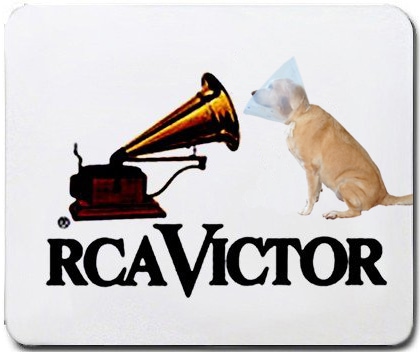 I’m hoping this pose will get me noticed by an agent!

And if I get really, really lucky, someone will mistake me for one of these things and fill me with ice cream! 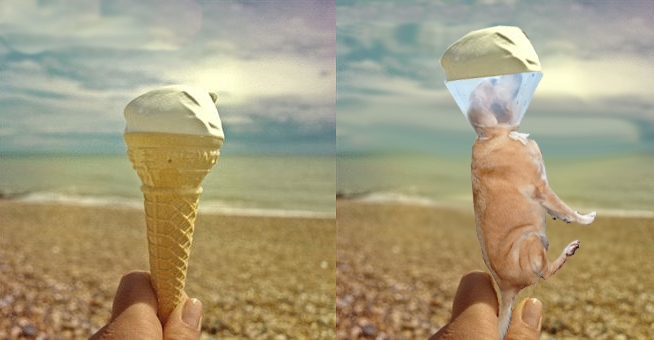 Ok I have to go now. Looking back at this, I’m pretty sure the scone has driven me crazy. Time to go aim this thing at a shin….

Goodness, I do think that cone is getting to her!  😉  If you’ve never seen a hot spot up close and personal, turn away now – this is pretty ugly, but I felt it necessary to include a pic of the real thing for the sake of reference… 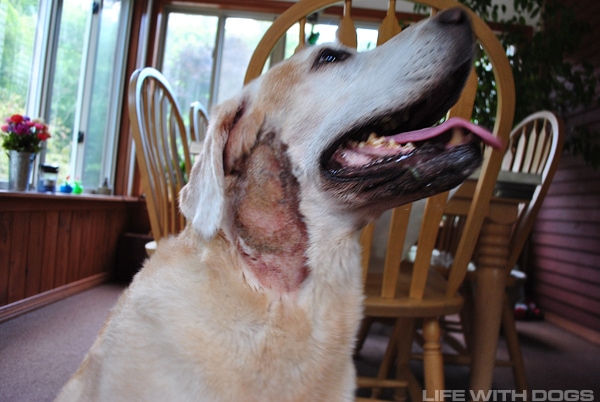 25 thoughts on “The Day I Thought My Dog Was Dying”