Pratima Devi is known in her hometown as the Dog Lady of New Delhi, and for very good reasons.  She loves dogs so much, and every day she takes the time to feed and care for over 400 stray dogs living on the streets.  This 65-year-old woman is a shining example of care and compassion, which seems to be in short supply these days.

Of the 400 plus dogs she cares for, 120 of them live in an old abandoned shanty that’s right near Devi’s home.  According to her, “This is my religion.  I am doing good deeds.  People say you are doing this and that (complaining about Devi’s good deeds).  What is their problem with whatever I do?  I mean, people should be encouraged by me.”

Devi knows that taking care of that many dogs can be an extremely expensive endeavor for anyone.  However, she lives in a very poor part of India, and is forced to collect trash and recyclables to make money.  She only makes about 150 rupees a day, which is about $2.24 in US Dollars.  Regardless, she works as hard as she possibly can, because she knows that so many dogs rely on her not just for food, but she takes them to a vet to ensure their health as well.  She would never want to let them down, because she loves all of them so much. 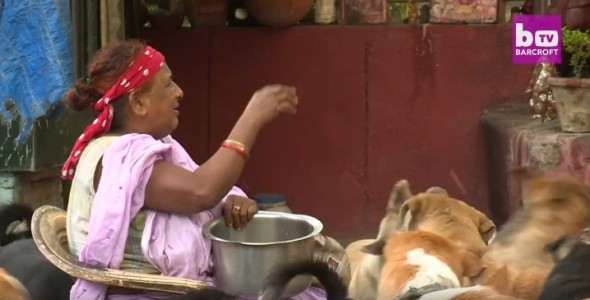 “Nothing was here before.  Earlier I had a tea stall, I used to make tea here,” said Devi.  “I had one or two dogs, then they started giving birth to some more dogs.”

At one point not that long ago, Devi’s tea stall was destroyed in a storm.  She had nothing to give the dogs, nor any way to provide proper shelter for them.  She says that she didn’t really eat anything for about four days after the tea shop was destroyed.  She was far more concerned with the health and well-being of all of her canine best friends. 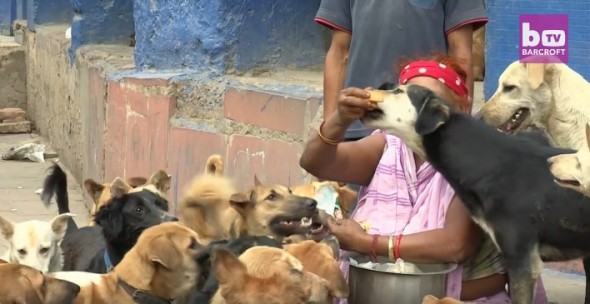 Devi is a wonderful person, and thanks to her, a very large group of dogs in one of the poorest of the world are well taken care of.  It’s people like Pratima Devi that helps to restore our faith in humanity.