Hank’s best friend is his stuffed hippo.  They spent every minute together until a tragic incident left Hippo barely clinging to life and in need of emergency surgery.   And when the police got involved, the situation went from dire to….. well, it was never actually dire to begin with, so it just got even sillier!

Bonded pairs are seen from time to time, so staff at the Fox Valley Humane Association in Appleton, Wisconsin shelter had no problem making sure that Hank and Hippo were in a room together.  Everything seemed to be going so well, but one morning staff found Hippo nearly decapitated, with stuffing everywhere.  Did Hank really have it in him to kill his best friend?  What would have led to this shocking scenario?

Hank and his purple hippo are a bonded pair, so if you aren’t ready for a 4 year old Chocolate Lab to come home when you adopt your fuzzy Hippopotamus…well, sorry, we can’t approve your application. The hippo won’t let us get an age on her, but we don’t think she’s quite as old as Hank..They’ve been together a long time though. She IS spayed and current on vaccinations, but does seem a bit lethargic. Hank is most definitely not. They do say that opposites attract…. #fvha #foxvalleyhumaneassociation #adoptme #adoptdontshop #labsofinstagram #rescuedog #chocolatelab #shelterdog #fuzzypurplehippo

UPDATE: The Fuzzy Purple Hippo, bonded with Hank, who we told you about last week has had a medical emergency. Dr. Laura is currently performing life-saving surgery to repair the near-decapitation. Details of the incident which caused the injury are murky, as Hank is refusing to answer our questions. (Yes, we have tried sternly asking, “what did you DO??” but he only looks away with a guilty look on his face.) Please keep the Fuzzy Purple Hippo in your thoughts. We will continue to keep you updated. #fvha #foxvalleyhumaneassociation #shelterlife #fuzzypurplehippo

UPDATE: Fuzzy Purple Hippo is resting comfortably (despite the cone of shame) back in her kennel with Hank this morning. She is groggy from pain medication and her demeanor seems a bit flat, but we are hopeful for a full recovery. Dr. Laura decided to leave her wounds open to allow for drainage and perform a full stuffing extraction to avoid future surgery (for Hank…shhhhh.) We will continue to keep you posted. #fvha #foxvalleyhumaneassociation #shelterlife #fuzzypurplehippo #adoptme

UPDATE: Since yesterday’s casual questioning brought no results, Hank was brought in for a formal interrogation into the assault of his companion, the Fuzzy Purple Hippo. As of 11:00am Hank’s jowls remain firmly closed regarding the incident. #fuzzypurplehippo #fvha #foxvalleyhumaneassociation #adoptme #shelterlife

UPDATE: Fuzzy Purple Hippo met with a therapist this morning to discuss whether or not she feels safe in her relationship with Hank. Although their love for one another is very apparent, we want to be sure that there are no underlying issues and that she is not suffering from any emotional scars from her injuries. HIPPO laws prohibit her therapist from disclosing what she said in their session. …wait…we meant HIPPA laws, sorry. **Domestic violence and PTSD are serious issues. If you or someone you know are are suffering, help is available! The National Domestic Violence Hotline 800-799-SAFE PTSD USA Helpline 877-717-PTSD #fuzzypurplehippo #fvha #foxvalleyhumaneassociation #shelterlife

UPDATE: Hank met with his Humane Officer-appointed Attorney this morning to discuss the allegations of Hippossault. Although no formal charges have been filed, there are no other suspects at this time. His attorney has advised him to plead the 5th. #fuzzypurplehippo #fvha #foxvalleyhumaneassociation #shelterlife

UPDATE: Chief Thomas, of the Appleton Police Department, and K9 Blue (APD’s Therapy Dog in-training) came to FVHA this afternoon to examine evidence found in Hank and the Fuzzy Purple Hippo’s kennel. We are confident that with the exceptional investigative skills of Blue and the Chief, the case of the Hippossault will be closed soon. A formal announcement from the chief has been scheduled for tomorrow morning. (Swipe to view all photos) @appletonpolicedepartment #fuzzypurplehippo #fvha #foxvalleyhumaneassociation #shelterlife #therapydog

APPLETON POLICE CHIEF THOMAS RELEASES OFFICIAL STATEMENT REGARDING FINDINGS OF HANK’S INVESTIGATION The evidence, as well as information garnered from discussions with Hank and his attorney and the Fuzzy Purple Hippo and her therapist have brought the full story to light. Hank is not only INNOCENT, but a hero! Read the full, sometimes hard to read yet deeply romantic account of the events leading up to the discovery of the tragedy on our Facebook page later this morning. @appletonpolicedepartment @nbc26_gb #fuzzypurplehippo #fvha #foxvalleyhumaneassociation #shelterlife

The video is very quiet, but Appleton Police Chief Thomas formally cleared Hank of all charges.  As soon as his innocence was ascertained, Hank was adopted.  Hippo (who curiously was left deflated instead of being restuffed) was of course adopted, too.  Hopefully now the rest of their days will be worry-free. 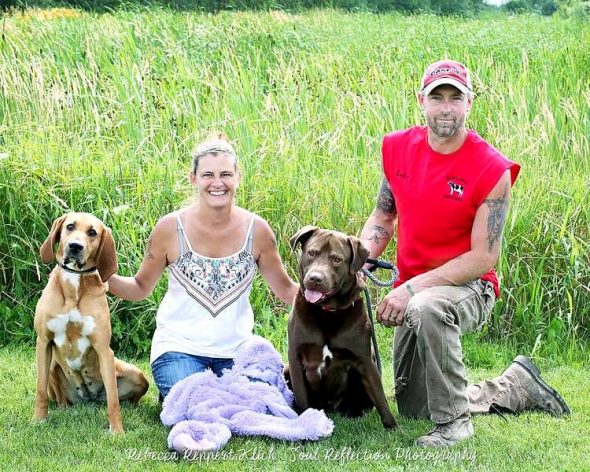