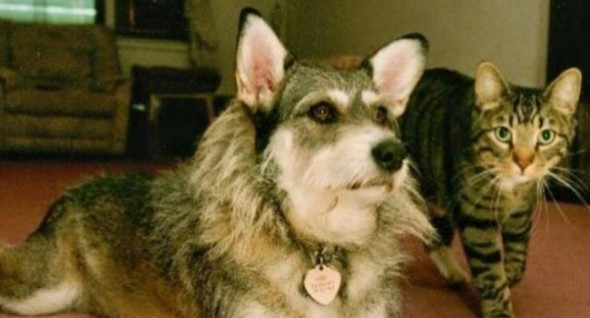 Ginny’s story begins, as we know it, when she was discovered a landlord. In a closet. With her three puppies. Her owner had abandoned her when he moved out.

At the time, the shelter staffers estimated it had been roughly a week for the little family with neither food nor water. All four were properly treated, then put up for adoption.

Philip Gonzalez, in the meantime, was depressed. He was on disability after a work-related accident and a friend suggested getting a dog to help him cope, cheer him up. One walk with Ginny and he found a love match. He took her to his home in Long Beach, N.Y..

Not long after bringing her home, though, he discovered that Ginny was a dog who intended to pay back the kindness that had been shown to her. One day, on a random walk, she pulled away from Phillip and began scratching at a pipe. Inside, they discovered, were five kittens. Phillip brought them to the shelter — but it turned out to be the first of many such rescues.

Ginny continued to find cats in need of saving, in garbage cans, buildings and all kinds of strange places and they became regulars at the shelter, bringing in new feline friends to be adopted out.

One day, Ginny decided to adopt one herself, literally begging at the kennel of a one-eyed cat on one trip to the shelter. Phillip brought it home. On the next visit, he chose another. Though it wasn’t known at the time, this kitty turned out to be deaf. Eventually, she and Gonzalez lived with some 20 rescue cats, each one disabled in some way.

The pair still did what they could for those left on the street, though, using donations — and even Gonzalez’s disability checks — to fund a daily feeding operation that kept the feral cats alive and as healthy as possible. It has been estimated that the pair saved roughly 1,000 cats during their time together. In fact, two books — “The Dog Who Rescues Cats: The True Story of Ginny” and “The Blessing of Animals: True Stories of Ginny The Dog Who Rescues Cats” have been written to document her good works.

“It was meant to be between Ginny and me,” Gonzalez told Animal Planet during a segment they shot back in the 90s. “She was injured and I was injured. And she gave me a purpose.”

Ginny passed away in 2005 at the ripe, old age of 17. So lauded was her work that she was eulogized at the Westminster Cat Show.

These days, Ginny’s legacy lives on through The Ginny Fund, a nonprofit that still feeds the feral cats of Long Beach to this day while finding homes for rescue kitties, educating the public on the important of trap, neuter and return programs and raising money for their goal: a sanctuary for unwanted animals.