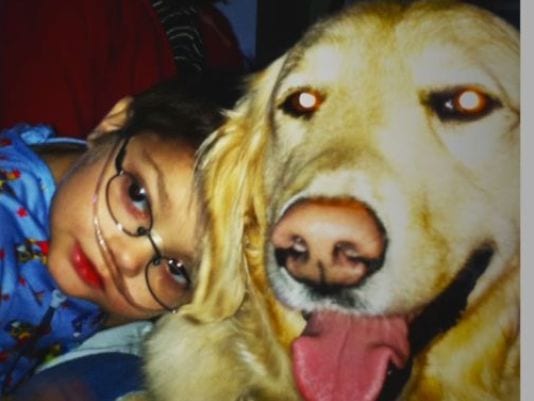 A little boy named Creed hadn’t known much else in his short life, other than extended hospital stays and some pretty extreme illnesses.  Casper and Creed shared a bond so strong, some nurses credited Casper, even though it was only for a short time, with bringing this sick little boy back to life.

“I told Creed that Casper was with him,” Stephanie Campbell, Creed’s mother.

Casper had hopped up into bed with Creed, and Stephanie placed Casper’s paw in Creeds hand.  A nurse in the room at the time was witness to what happened next.  Creed actually squeezed Casper’s paw in his hand.

According to the nurse whom witnessed it, she remarked, “That dog just brought that boy back to life.”

It wasn’t long after that Creed finally passed away.  What’s truly beautiful is at the same time of his passing, a new litter of Canine Assistance puppies were born.  In honor of Creed, and the special bond Creed and Casper formed throughout the years they were together, one of the puppies was named Creed.

A year later, Creed the service dog has now been with his new best friend.  He was given to 18-year-old Blair Hagelgans, a sufferer of epilepsy.  Because Blair had Creed, he can go off to college with his new service dog, and be way safer with than without him.  Who knows?  Maybe Blair and Creed will form that special bond that Creed and Casper shared.