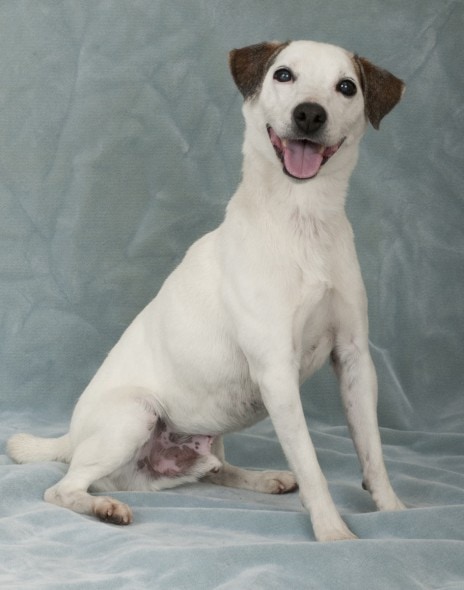 Russell (formerly known as “Macho”) has had a rough life, repeatedly rotating between life on the streets and life in a cell. Russell was let go multiple times, to wrestle the streets wherever he wanted and whenever he wanted. It wasn’t an easy life though!

His tough existence landed him in the slammer a few times. Once he even shared a room with very odd cellmates-a parrot, a rabbit and a cat! Needless to say, Russell was not too thrilled with that assortment of characters!

Russell is a smart dog, which helped him survive the streets for so long. However, his luck nearly ran out when he finally ended up on death row of a local shelter. Thankfully, he was rescued just in the nick of time by Red Door Shelter, a Chicago organization that works to provide a no-kill, cageless safe haven to abandoned animals.

Now, Russell, a wise little Jack Russell terrier mix, has stopped wrestling the streets and is taking life a bit easier. He has some special needs from his time on the streets. All of the loud car alarms and train rumblings left Russell partially deaf and all of the scraps he had to fend for gave him some belly issues. As a result, he is on a high-quality, special diet-a prescription low protein dog food of salmon and sweet potato. Russell loves his new diet, though, and is quite grateful after fighting on the streets for thrown out hamburger meat!

Russell currently likes to spend his weekends in the park with his foster family, wrestling with his younger dog friends-a skill he likely acquired from his time on the streets. Russell is still quite an active little guy and enjoys running around, but he has also learned to appreciate relaxed times, especially if they include the occasional rub!

Russell is now on his ultimate mission: finding his very own human or family to love and live out his days with. So, if you know of anyone looking for a handsome fella like Russell, then don’t hesitate to contact Red Door. You can fill out an adoption application at: http://reddoorshelter.org/adoption-app.php

Since the Middle Ages, a “red door” was a symbol of a safe haven.  Red Door Shelter is a Chicago organization that seeks to provide just that- a safe haven for all animals in their care. Their mission is to promote respect for all animals through education, shelter, rehabilitation and adoption. They provide a no-kill, cageless environment for animals in their care and provide permanent, loving residence for those few animals who can’t find their forever homes.