A beautiful adoption story from Sarah Nagem of the News Observer.  After getting a Carolina dog, she found out that this is an ancient species of dog, and is quite special.  Science believes that the species is so old, that they may have got to North America by crossing the Bering land bridge from Asia!  Now that is one old school breed!

When I decided to adopt a dog five years ago, I didn’t care much about the breed. But I wanted something that was both athletic and lazy, with enough energy to become my running partner and enough snuggles to lounge with me on the couch.

A floppy-eared mutt with big brown eyes looked up at me at the Wake County Animal Center, and we’ve been best friends ever since.

The folks at the shelter said Lucy the Dog was a terrier/hound mix, but I figured that was just a guess. I thought she resembled a moose, with her long skinny legs and barrel-shaped chest, so I added “The Dog” to her name – you know, to clear up any confusion.

A technician at the veterinarian’s office called her an LBD, short for “little brown dog.”

I later started dating a man (he’s now my husband) who presented a new theory:

Lucy is a Carolina Dog – a free-spirited mascot of the Southeast, a gentle but suspicious soul with kibble stuck to her whiskers.

Growing up in West Virginia, I had never heard of such a dog. But some research revealed Lucy has many Carolina Dog traits: fish-hook tail, small waist, long neck, almond-shaped eyes, tiny paws. She’s the right size and color, too – light brown and about 40 pounds.

I wanted to know more about this breed, which was discovered by scientist I. Lehr Brisbin in the swamps of South Carolina in the 1970s.

A few years ago, a study revealed that Carolina Dogs are among several breeds that lack genetic markers of European descent. Some researchers think these dogs crossed the Bering land bridge from Asia into North America 12,000 years ago, following humans through new terrain as they follow us to the bathroom today.

They made their way across the United States, eventually settling in the Southeast, where the tall swamp grasses serve as protection from predators. Archaeological investigations have shown that Native Americans ceremonially buried the dogs.

What strikes me most is that they are wild – some people call them American dingos – yet they make wonderful family pets.

“Because for thousands and thousands of years they learned how to get along with people,” said Brisbin, who got the breed recognized by the United Kennel Club.

They learned to bark only when there was trouble. No one wants to hear a howling dog all night now, and apparently no one wanted to hear it a long time ago either.

Carolina Dogs are loving and affectionate with their families but are often wary of strangers. Brisbin said they usually take on an attitude that says, “Oh, God, you’re gonna pet me, just get it over with.”

Carolina Dogs are still running wild in the Southeastern states, although Brisbin said there’s no way to know how many. Some of them, he said, “I can’t get my hands on.”

He said he has given away about 300 of the dogs over the decades. He doesn’t charge a fee.

“Native Americans felt they were a gift from the great spirit, so they should be shared,” Brisbin said.

While Carolina Dogs call this region home, they can be found across the nation, partly because breeders and rescue groups send them to families all over.

Pestana said she agreed to foster a puppy nearly nine years ago and learned it was a Carolina Dog from the South. She fell in love with the breed and later started the nonprofit rescue group, which seeks out Carolina Dogs in shelters and finds homes for them.

The dogs don’t have to be pure Carolina Dogs – mixed breeds are just fine.

After looking at pictures of Lucy The Dog, Pestana confirmed my suspicions. Lucy is part Carolina Dog. Along with other obvious characteristics, Pestana pointed out Lucy’s “beautiful eyeliner” and solid black nose.

“You can look at that face and see it’s a wonderful dog,” Gunnell said.

Well, I think so.

The soft-as-silk floppy ears are telling of her hound heritage. Carolina Dogs typically have ears that stand tall.

There’s no DNA test for Carolina Dogs, so I can’t know for sure. No one knows for sure, which adds to the mystique.

These days, I talk about Carolina Dogs to anyone who will listen. A few years ago I didn’t know they existed, so I figure lots of other people don’t know either – especially us Northerners who have made our way south.

I look twice every time I see a medium-size brown dog with a fish-hook tail. I take note of the ears and paws. I look for big brown eyes.

I’d love Lucy The Dog just the same if she weren’t a Carolina Dog. She trained with me for my first half-marathon. She snuggles with me during lazy evenings at home.

In a way, Lucy represents everything I cherish about North Carolina, my new home. She’s a little wild, but she’s also serene. Family is everything to her, second only to food. 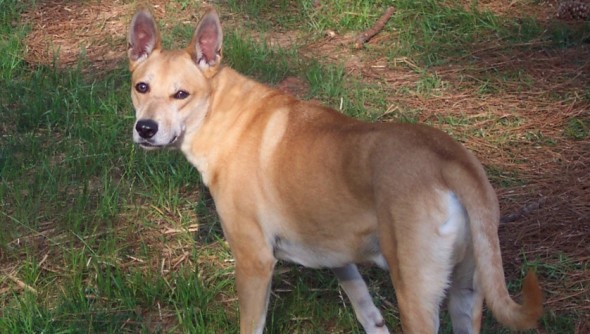