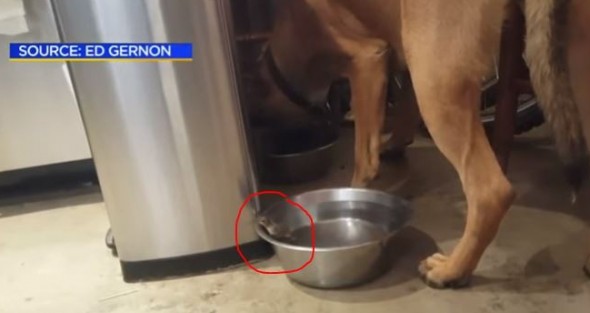 Rex, a German Shepherd mix was living on the street, doing whatever he needed to do to survive, including fighting other dogs and killing cats.  Rex was rescued and found a forever home with Ed Gernon and, to Gernon’s surprise, a month after his adoption, this dog went out of his way to save another creature.

Gernon and Rex were out on a walk, “and he suddenly stopped and he would not move. I mean it’s tiny and it’s dead as far as I’m concerned. It’s covered in ants. It’s got no feathers,” Gernon told CBS Los Angeles in a television interview.  Rex had found a sick and very tiny hummingbird.

A year later, Hummer, as she is called, has become a regular part of the household with Rex and Gernon, even going so far as to share Rex’s water bowl when she needs the occasional bath.  Gernon has nursed the hummingbird back to health which includes feedings every 15 minutes of a special sugar water, sun up to sun down, and having taught her how to fly using a blowdryer.

“I rescue this dog. He rescues the bird. The bird rescues all of us in a weird sense and it’s just a miracle,” Gernon told CBS.