No, you’d rather not cuddle with them. They seem a little too unpredictable and unkempt for that. And it’s not tempting to project human characteristics on them either. But it is easy to feel sorry for some of them, who bear traces of injuries, disease, and accidents. Most resemble one another: large, with a light-brown, sometimes darker coat. Some have short legs paired with unusually large bodies.

Despite their scars, the wild dogs of Istanbul seem self-sufficient and untroubled, as if no one could mean them any harm. You can find them everywhere: between parked cars or, early in the morning, under the chairs in front of the Starbucks on Taksim Square. Often they just lie there and doze. Are they recovering from last night’s activities? Most people don’t seem bothered by them, but it’s obvious that some, a little uncertain, take pains to avoid them. But they are not to be made fun of because of that. 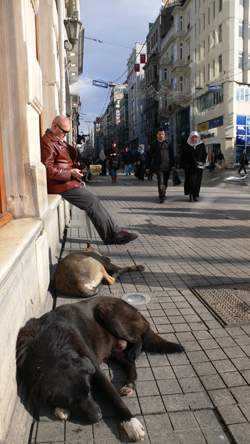 The dogs’ presence in this metropolis is not entirely without problems. Some of the animals are said to be so smart they understand traffic lights, but more often they cross streets in front of terrified drivers, keep residents awake with their barking, or even attack someone. In fact, I have myself observed an incident in my neighborhood Tarlabası, where a young man was literally chased by two dogs. He fell to the ground and dragged himself into a barbershop. It was painful to watch, but it all happened so quickly that one couldn’t really intervene; besides, how would one disperse the dogs without any adequate stick or tool? I don’t know what exactly preceded the incident, why the dogs had attacked the man in the first place. These attacks, however, happen far less often than one might expect, considering the dogs’ constant presence. No reliable count exists, but according to estimates, the dogs number about a hundred thousand. When you come to Istanbul, you will see that this doesn’t sound like an exaggeration.

The dogs’ position is a strange one: They are used to having people around, and even depend on them, but they don’t live directly together with humans. Behavioral scientist Konrad Lorenz, who once wrote about Istanbul’s stray dogs, observed that they carefully avoid loose small hens and newborn sheep — a lesson they learned in order to survive. Instead, they feed themselves in two ways. First, residents in the poorer sections of the city often put their trash bags out in front of their houses, where dogs and cats plunder them before trash trucks cart off the remaining piles in the early morning. But more and more metal trash cans are popping up, and their content is inaccessible, at least for dogs.

Second, many people follow a custom (unfamiliar to Western observers) of more or less adopting a dog and regularly feeding it, without bringing it into their homes. Some people even make beds out of cardboard that become a dog’s regular spot in front of the house. Animals in these relationships are not full-fledged pets, but they are not complete strays either.  In any case, their uncommitted “owners” never take them for walks. This reluctance to take in the animals can’t really be due to the size of the apartments; in a society where the single lifestyle is practically unknown, almost all residences are designed for families, and rarely measure less than 80 square meters. So what is the reason?

In Turkey, relationships to dogs are complex. In his novel My Name Is Red, Orhan Pamuk enters the mind of dog and asks himself about the origins of mankind’s enmity:

Why do you believe that those who touch us spoil their ablutions? If your caftan brushes against our damp fur, why do you insist on washing that caftan seven times like a frenzied woman? Only tinsmiths could be responsible for the slander that a pot licked by a dog must be thrown away or retinned. Or perhaps, yes, cats…

Although there is no clear basis for this belief in the Koran, strict Muslims consider dogs — especially their drool — to be unclean. People don’t let the animals into their homes because they could dirty the prayer rug and because, even today, little tradition exists of keeping dogs as pets. Furthermore, a common belief holds that köpekler, as dogs are called, prevent angels from visiting. Not all Turks share these views. In parts of Istanbul influenced by the West, all sorts of purebred dogs can be found, including traditional fighting breeds. In these cases, dogs are highly desirable status symbols, and many stores sell pet supplies. However, problems with religious neighbors disturbed by the presence of dogs can arise. “Many people want a dog, but don‘t know how to go about it,” says Bilge Okay of the dog protection society SHKD, which works toward better treatment of the animals.

Although keeping pets in this way is a very recent development, the breeding of dogs has a long tradition in the region. One of the oldest pieces of evidence for the domestication of dogs at all comes from Çayönü — in eastern Turkey, near the border with Syria –— from approximately 12,000 years ago. Well-known breeds like the Kangal, a very large shorthair, come to mind as well. Kangals were herd dogs used by Anatolian shepherds even before Islam spread throughout the region; they were associated with one of the 12 months of the year.

But back to the wild dogs of Istanbul. Their presence in the city stretches far back, but their origins are the matter of legend: Do they hail from Turkmenistan? Did they arrive with the troops of the conqueror Mehmed II in the 15th century? Wherever their roots may lie, they have been an established part of the city for centuries, skulking in the shadows of the buildings.

Accounts of travelers — sometimes baffled, sometimes disconcerted or frightened — rarely fail to mention the dogs. In the 17th century, Jean de Thévenot noted that rich citizens of Istanbul bequeathed their fortunes to the city’s dogs to ensure their continued presence. And his contemporary Joseph Pitton de Tournefort heard from butchers who sold meat specially intended for feeding the dogs. He also saw how the city’s residents treated the animals’ wounds and prepared straw mats and even small doghouses for their canine neighbors. No less an establishment than the legendary Pera Palas, the best hotel, cared for the dogs and fed them regularly.

Edmondo De Amicis, an Italian traveler whose book Constantinople records his impressions of the city in the mid-19th century, went so far as to describe Istanbul as a “giant kennel.” And Grigor Yakob Basmajean, an Orientalist born in Edirne, claimed in 1890 that no other city in the world had as many dogs as the metropolis on the Bosporus. The dogs were so omnipresent that streetcar employees had to drive them from the tracks with long sticks so the horse-drawn wagons could pass through. Passers-by could often stop to watch them fighting with one another. Their howling could be heard all night; there were so many dogs that their voices blended into a constant sound “like the quaking of frogs in the distance,” as one observer vividly described. It sounds like the dogs, not the authorities, set the tone. In popular shadow-puppet plays, dogs were compared to the poor.

Dealings with canines were always marked by ambivalence. Although dogs formed part of a romantic cityscape, caricatures from the Ottoman period depict them as threats to be stopped, along with cholera, crime, and women in European clothing. Again and again, attempts were made to catch them and remove them from the city. In the late 19th century, Sultan Abdülaziz decreed that the dogs should be rounded up and deported to Hayirsiz, an island of barren, steep cliffs in the Marmara Sea. Sivriada, a tiny island to which Byzantine rulers once banned criminals, made headlines in 1911 when the governor of Istanbul released tens of thousands of dogs there. A yellowed postcard shows hundreds of dogs on the beach; their voices could be heard even at great distances. However, an earthquake that occurred shortly thereafter was taken as a sign of God’s displeasure, and the dogs were brought back.

Attempts to stem the plague of dogs in the city continued, with more or less success. Their presence was always seen as a sign that the city could not impose order and guarantee the safety of residents. Cities like New York and Paris, where the problem was under control, became role models. Shortly after the revolution, Mary Mills Patrick, an American who taught at Istanbul’s Women’s College, thanked the new Turkish regime for its efforts in this area; after all, a civilized city was no place for packs of dogs. But even in the decades that followed, the dogs never completely disappeared. Occasional efforts to eliminate them were seen as acts of barbarism. Until 2004, when a law to protect the animals was finally passed, meatballs laced with strychnine were not uncommon. But today such draconian measures are things of the past.

Real change will only come once new solutions for the city’s trash problem are found and garbage is no longer simply placed on the curb, as it is in many neighborhoods today. Then things will be tough for the dogs. Animal protection activists today call for a concerted effort to catch the dogs, vaccinate them against rabies, sterilize them, and tag them before releasing them back into their territory.

The World Health Organization also recommends this strategy. But gray areas exist in how authorities deal with the problem. Animal advocates claim that inexperienced veterinarians pack the neutered dogs into overcrowded cages, load them into trucks, and dump them in Belgrade Forest, about 10 miles northeast of the city near the Black Sea coast. There, the dogs are often attacked by wild animals or starve. “In the end, it would be better to put the animals to sleep than to release them in the unfamiliar wilderness,” says Bilge Okay. “But that would be against the religious beliefs of the people operating these facilities.”

Since status-conscious Turks have little interest in keeping mixed-breed dogs as pets, some of these animals make their way to Germany, where new owners adopt them. But this involves bureaucratic hurdles and high costs, especially since the dogs cannot simply be sent air freight but must be accompanied by someone to transport and deliver them.

The city today is also full of stray cats. They have it better — nobody is out to kill them. But that’s another chapter in the story of humans and animals in Istanbul.

[dcs_head top=”0″ color=”#666666″] [/dcs_head] Bernd Brunner is a freelance writer who lives in Istanbul. He is the author of Bears: A Brief History, Moon: A Brief History, and The Ocean at Home: An Illustrated History of the Aquarium. This piece was translated from German by Lori Lantz.
[dcs_head top=”0″ color=”#666666″] [/dcs_head]