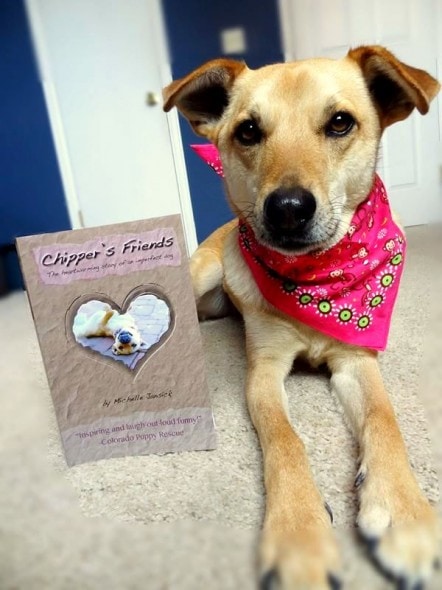 She has a missing tooth and an occasional limp.  She doesn’t get along with every dog she meets, and sometimes she falls UP the stairs.  Chipper—a five-year-old rescued mutt with golden fur and soft brown eyes—is far from perfect, but that hasn’t stopped her from making the world a brighter place.

Chipper failed out of the therapy dog program when she reached her rebellious adolescent stage and started barking at sweet little old ladies.  The four-legged “failure” quickly discovered that when one doggy door closes, another one opens.  She decided to try her paw at writing and published a book about her life as a therapy dog dropout.  Her autobiDOGraphy, which teaches that you don’t have to be perfect to make a difference, is inspiring people (and their pets) all around the world to do nice things for others.

A woman from Washington state read about the paw-printed valentines that Chipper made for some lonely seniors, and decided to make hand-printed cards with the help of her one-year-old daughter, Kayt.  The mother-daughter team delivered the cards to friends and neighbors who needed cheering up.  That fun day inspired Kayt and her mom to keep bringing smiles to others, so they started a tradition of visiting a nursing home twice a month.

Chipper’s book motivated a family in Colorado to buy warm socks and sleeping bags for some homeless youth during an arctic blast.  A retired seizure alert dog named Hobo followed in Chipper’s footsteps by cheerfully standing still while his family painted his paw with bright colors to make Thanksgiving turkey cards for some kids at an orphanage.  A mental health therapist from Kentucky planned a field trip for some troubled adolescents to volunteer at an animal shelter.

Each month, Chipper chooses a different charity to receive the profits from her book sales.  Thanks to her loyal fans in 22 countries, she was able to donate over $1000 during the first year to help children and animals.  She threw a pizza party for her friends at the homeless youth shelter.  She bought Christmas presents for the children’s hospital.  She helped to save the lives of homeless pups, abused farm animals, and puppy mill dogs.  She sponsored an orphan in Haiti, and helped to rescue children from the sex trade.  She supported a charity that rescues shelter dogs and trains them to assist children and adults (veterans) with disabilities.

Chipper has no plans to stop donating profits from her book, and she has already lined up a book promotion to benefit a local domestic abuse shelter that offers a safe place for women, children, and their pets.  People who buy the book in April as a Mother’s Day gift can get a paw-printed bookplate label with a personalized message from Chipper to their mom… and a big chunk of the profits will go to the Kindness Ranch, a 1000-acre sanctuary in Wyoming for animals who have been used in laboratory research.

Although Chipper’s story was originally intended for middle-aged women, she has gained popularity with everyone—male, female, young, old, two-legged, and four-legged.  A six-year-old boy in Wisconsin was so delighted by Chipper’s funny adventures that his mom read some chapters aloud to his kindergarten class.  A 93-year-old woman was so touched by Chipper’s heartwarming tale that she immediately bought a copy for her daughter who volunteers for an animal rescue group.  A mailman in California loves Chipper’s book so much that he loans his copy to people along his route.  A woman in Florida read it to her dogs, and they gave it 4 wags (the best possible rating).

To learn more about Chipper and her book, “Chipper’s Friends:  The Heartwarming Story of an Imperfect Dog,” visit www.ChippersFriends.com and follow her on Facebook at www.facebook.com/ChippersFriends. 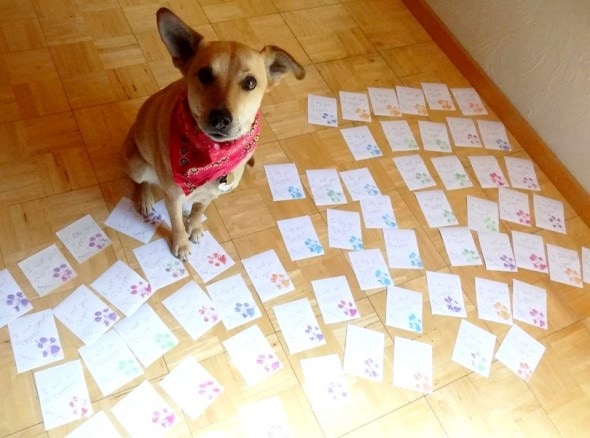