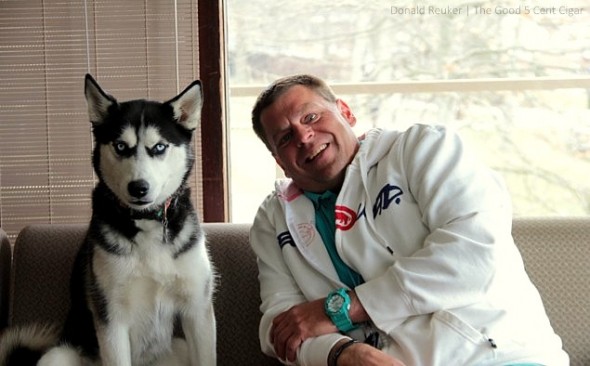 Last week Eliza Radeka wrote an article for the University of Rhode Island’s newspaper The Good 5 Cent Cigar on housekeeper Mike LaPolice and his adopted therapy dog, Ivy.  The students love Ivy and say she brings comfort to their lives away from home, but after the article circulated, campus staff ordered the dog to be removed and not brought back to the school.  Now students are fighting to bring her back.

“I was happy about the article because I thought it would open people’s eyes to how amazing Ivy is,” LaPolice told Radeka. “I never thought this would happen.”

Radeka’s article was a feel-good piece about how beneficial Ivy’s presence is, and students were happy to praise the husky.

“In September, a relationship that I was in came to an end and hit me pretty hard with the feels,” said Peck Hall resident Andrew LeCampion. “Ivy jumped up on the couch and laid down next to me with her head on my chest because she could sense that I was upset.”

LaPolice, who is the Peck Hall housekeeper, has worked spent the last 25 years working for the school.  When his dog died, he adopted Ivy and began bringing the puppy with him to work.  In order for her to be allowed on campus, she had to be a registered therapy dog, so LaPolice had her certified when she was five months old.  Students loved her.

“If I had $5 for every time someone takes a picture of Ivy, I wouldn’t have to work here anymore,” LaPolice said.

There were occasional complaints from Housing and Residential Life (HRL) staff, but if the school has stated that therapy dogs are acceptable, there should be no problem.  However, therapy dogs are not protected under the same laws as service dogs.

“As far as I know, it’s pretty much just HRL ‘higher-ups’ that have an issue with her being here, stating something along the lines of it not being professional,” said Tyler Inkley, a Peck Hall resident advisor.

HRL’s associate director, Jeff Plouffe, confronted LaPolice the day the article aired and demanded he and Ivy leave without that day’s pay, and said the man could only return the next day if Ivy was not with him.  This overreaction is upsetting not only to LaPolice, but to the students who adore her.

“They need to realize that we love her and she brings such a positive energy to the dorm,” LeCampion said.

A petition has been started to get Ivy back on campus.  If you would like to sign it, please click here.  LeCampion believes that while the petition is a good start, what really needs to be done is get President David Dooley involved.

“I don’t want to be confrontational, I just want to get the point across that Ivy deserves to be here,” he said.

Meanwhile, LaPolice is planning to speak to a doctor to see if he can be allowed to have Ivy with him for a medical reason.

“I’ll go to a psychiatrist if I have to,” he said.