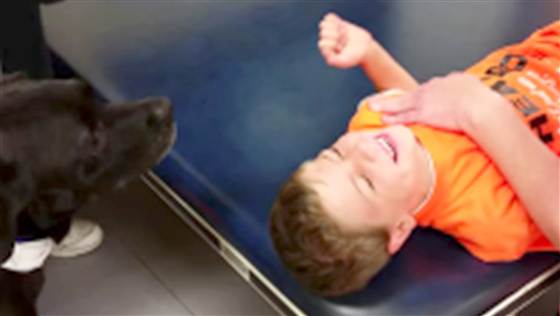 At only six years of age, Jack Doss has already been through a lot.  He’s had two brain surgeries, and has barely began to experience life yet.  During the last surgery in July, Jack suffered a stroke and lost mobility on the left side of his body.  He wasn’t showing any signs of progress during therapy sessions, and it wasn’t until his fourth visit to his physical/occupational therapists’ office that things really got going for him.  On this visit he met Tank the therapy dog, who turned out to be just the right motivation for Jack to move again.

At Akron Children’s Hospital in Ohio, Tank is one of many therapy dogs being involved in patient treatment.  Therapists there make the claim that the dogs are beneficial in many ways when it comes to motivation, endurance and regain of composure during sessions that can be long and emotionally frustrating to children.  According to Jack’s mom Ashley Doss, Tank has had “an obvious impact on Jack.”  Jack’s father Tyler says his son is crazy about animals, and thinks Tank’s encouragement was just what the young boy needed.

Tank came into the room where Jack was going through a therapy session, and Jack took immediate notice.  He was given a treat to give to Tank, and when everyone in the room saw Jack move his left arm again for the first time to give Tank the treat, no one could believe their eyes.

“I was fairly overwhelmed the first time I saw his arm moving again,” said Tyler.  “Guys don’t like to admit it when they cry.”

The excitement it brought to Jack, to just simply give a dog a treat and receive a lick on the hand as a thanks, has been repeated over and over again.  Jack loves every minute of it, and doctors are saying that there’s a very good possibility that Jack may regain almost all of the mobility on his left side again.  All of this is thanks to one dog’s love for treats, and one little boy’s love for animals.

“He’s handled everything so well,” Tyler said.  “He’s been great, and that’s made it so much easier for us.  He’s young enough that it’s almost like he doesn’t know any better.” 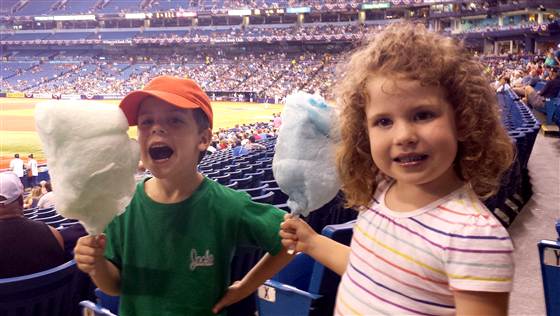