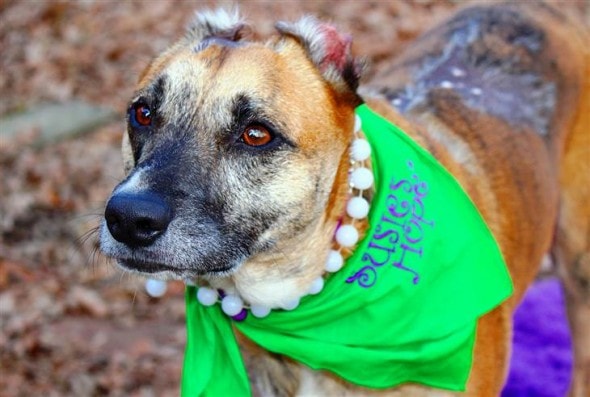 Susie the therapy dog has been awarded the Hero Dog of the Year award from the American Humane Society for 2014.  At a black-tie event held in Susie’s honor in Beverly Hills, she was dressed to the nines, complete with pearls and purple tutu, she was named number one of the eight finalist.

Susie’s mom, Donna Lawrence said, “I’m just blown away.  There were so many amazing dogs with great stories.  When they called Susie, I just wanted to cry.”

Susie’s life didn’t start out a very easy one.  When she licked the face of her then owner’s child, the owner reacted violently.  Susie was beaten and then set on fire, which caused her to lose her ears, and be covered in third degree burns.

It was a long and arduous recovery process for the pit bull mix puppy.  Many health care professionals and caregivers spent as much time as possible making sure Susie was as comfortable as possible, and she eventually pulled through.

When Donna adopted Susie, many friends and family were very surprised.  She had been through an attack from a neglected pit bull that spent almost all of its life tied to a tree in a neighbor’s back yard ten months prior to adopting Susie.

“It snuck up behind me and grabbed me by the ankle and went into a full attack,” said Donna.  “He lunged at my throat, but I had grabbed my collar so when he grabbed on, he bit my hand.”

Donna did get herself free from the attack and ran to a neighbor’s house.  She was then rushed to the hospital where they saved her life, but at a very great cost.  Donna had miscarried in the process, and was devastated.

“I had miscarried, and I had lost my ability to have kids because of the attack,” Donna said.  “They told me I had a zero percent chance.”

After going through what one would have to consider the worst situation a woman could be put through, Donna had become very fearful of dogs.

“If Susie hadn’t come into my life, I don’t know that I ever would have gotten over the fear,” said Donna.  “I was drawn to her spirit – her love and affection for people when she should hate them, you know?  She was living in the moment, not living in the past.  Happy.  I thought, ‘If this puppy can forgive humans, I can forgive dogs.”

Under Donna’s care, Susie became a certified therapy dog.  She helps other humans that are survivors of traumatic events learn to trust, and let go of their fears.  Susie has also fought alongside Donna in their home state of North Carolina, and got what is called “Susie’s Law” signed into effect.  This law has made penalties much stiffer in that state for those convicted of cruelty to animals.

The full event will be aired on television on October the 30th, 2014.  It can be seen at 8pm Eastern and Pacific time, and 7 pm Central, on the Hallmark Channel.