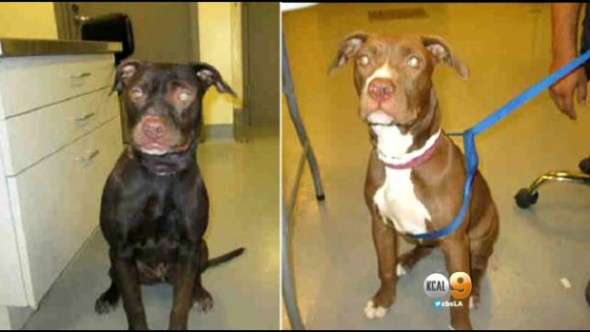 It was right around the Thanksgiving holiday when Coco, a female pit bull, had gone missing.  Just about a month later, Coco was found and returned to her family.  The weird thing was the dog thief tried to dye the dog’s fur a darker shade of brown in an attempt to fool her humans into thinking she wasn’t Coco.

The Riverside County, California animal control officers had come across Coco while picking up a different stray dog they had been called out for.  The mystery dog was scanned for a microchip, and did have one.  The chip said that the dog should be a reddish-brown female pit bull.  What they were looking at was a dog with a very poorly done dye job.

Coco’s family was informed of what was going on, and were happy to have their dog back.  It’s believed that Coco was died in an attempt to fool them into believing that she wasn’t their dog.  As hard as this would be dognapper may have tried, no one was fooled.  The deputy director of the shelter Frank Corvino thinks that Coco got lose from the area she was being contained in and took off.

Needless to say, you may be able to fool some people, but you’ll not be able to fool the microchip scanner.  Corvino said no one was convinced that this dog wasn’t Coco.  This was one poorly done dye job.

“The dye job is not very good,” Corvino said in a statement. “But it would work if someone’s looking for their missing, reddish-brown dog.”

It’s not suspected that there was any lasting damage done to Coco.  Other than a bad dye job, she was in perfect health and showed no signs of abuse.  Coco’s human mom, Heather Lowry was taken aback when she found out what had happened to Coco.

“I didn’t think someone would go as far as to dying a dog’s fur to keep them,” she told animal control officers.