It’s not very often that people are appreciative of burglars, but we certainly are today!  Four miscreants walking along a Chicago street broke into an SUV and stole a laptop.  They didn’t realize it, but a German shepherd was slowly roasting alive in the back.  His owner didn’t come out of a pub for another 40 minutes, but because of these filchers, the dog is alive and well.

Security cameras mounted outside the Irish Nobleman Pub in Chicago’s West Town neighborhood show four young men passing by a parked vehicle twice, blatantly casing it for valuables left unattended.  One of them throws a rock and boosts a laptop from inside, and then all four abscond with their loot. 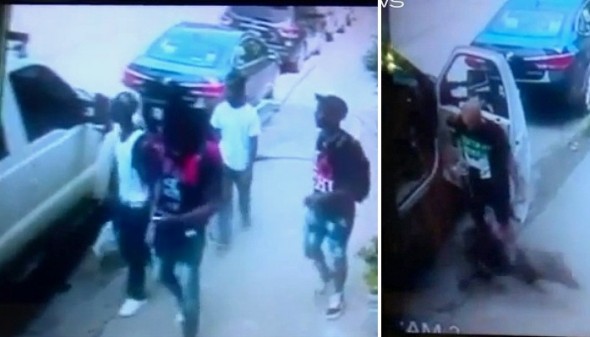 The owner returned to his vehicle 40 minutes after the break-in.  Morgan said footage shows that the dog was trapped inside for an hour.  The owner claims he parked in the shade, and had the air conditioning running before turning the SUV off, but anyone with common sense and a knowledge of basic science understands that the sun’s position moves continuously, and that as soon as AC is shut off a vehicle quickly heats right back up.

Police have not commented on the matter, because it is very possible the owner did not report the incident so as not to implicate himself in a clear case of animal neglect.  Hopefully he has learned his lesson (karma?), and in the future will not endanger his dog’s life for the sake of a pint.