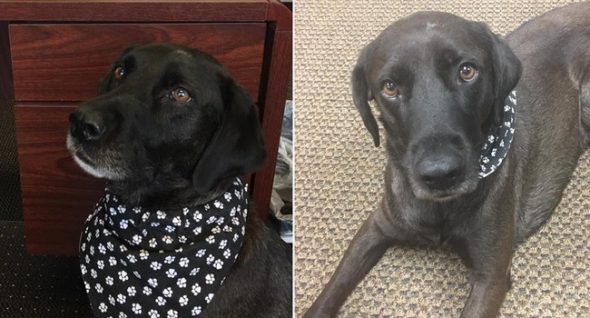 Jake, a 4-year-old Lab, was earmarked for search and rescue work, but sadly he didn’t make the cut.

“Some dogs have sensitive paws and his were too tender for that work,” General Dave Clark told InsideEdition.com. “He was referred to an adoption agency for service dogs. An employee in my office adopted him to try to retrain him.”

So Jake began learning how to work with handicapped people as a service dog, but that didn’t suit him, either. His previous training, you see, kept throwing him off.

“As they were training him, he had difficulty because if he smelled a cadaver or the smell of death, he would run to it,” Clark said. “Even though it only happened a few times, they felt they could not put him with the handicapped if he had the urge to bolt toward that smell.”

“When she brought him to work we noticed how gentle and empathetic he seemed to be. By chance, he was here with her when a victim came in,” Clark said.

He seemed exceptionally empathetic and sensitive.

“This victim had been beaten and injured very badly and was traumatized by the crime. She also had a very difficult time talking about it,” Clark said. “She enjoyed having Jake there. It was a comfort to her. That was an indication to us that he may have some important function and that maybe it could be duplicated for other victims.”

And so that is how Jake found his true calling as an emotional support dog; he now works in the office three to four times a week and even supports victims in court.

“He has a sense of when people were in need. He will lay his head in their lap and gravitate toward them so they will find that comforting,” Clark said. “His discipline and demeanor are unchanged. He performs like any service dog because he has had a lot of training. He responds immediately to commands but the empathy that he expresses and feels is untrained. That is just him.”

Jake attends court two days a week and even stands up when the bailiff says, “All rise.”

“We didn’t train him to do this,” Clark said. “He just does it because he sees everyone else do it I guess.”