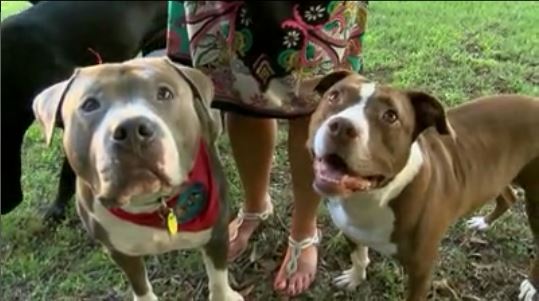 The York County Sheriff’s Office is reporting that they have rescued over a dozen dogs from a suspected dog fighting ring that has been under investigation.  The property in question came under suspicion after local code enforcement officers were searching for a burglary suspect on a completely unrelated call.

The report says that 11 of the dogs were on chains tied down using car axles, and eight of the dogs were badly scared from injuries consistent with those commonly found on fighting dogs.  After the dogs were taken from the property, they had a full medical evaluation at a vet clinic, where further signs of dog fighting were confirmed.

The animals are reported to have belonged to Frankie Lee Starnes, Jr.  There are a number of pending charges, however law enforcement haven’t formally charged him as of yet.  They are waiting for more medical information to ensure that they nail him for every possible thing that they can when it goes to court.  Some of the current pending charges are ill treatment of animals, dog fighting restraint law violation, county animal shelter violation and rabies violation.

As stated, those are just a few of the mountain of charges Starnes faces at this time.  The sheriff’s office got him to sign a surrender agreement, and the dogs are now in protective custody.  They WILL NOT be going back to where they were taken from if law enforcement has anything to say about it.