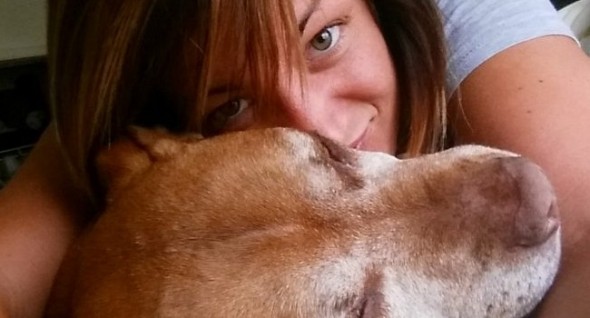 Molly served her country nobly for five years, much of it stationed out of Norfolk, Virginia on the USS Dwight D. Eisenhower CVN 69, where her job was launching aircraft as an Aviation Boatswain mate – Equipment.

In 2012, Molly tenure with the Navy ended. She received an Honorable Discharge. She went to college. She received a degree as a certified surgical technician. Life was good, but the sailor was about to veer into a storm.

“When I got out of the service I was living by myself and slowly noticed I wasn’t the same person,” Molly told Pets for Patriots‘ Wet Nose Blog. “My friends were still serving and had just left for deployment.”

With her family back in Indiana, she felt doubly isolated in Virginia. And so she made a wise decision: she headed to the Virginia Beach SPCA to find a companion and promptly fell in love.

Cossack was a dog with many “strikes” against him when it came to getting adopted: at 6, he was older, something many folks tend to count against potential companions. He was large. He was a pit bull mix, a breed type so often misunderstood. Most military bases ban pit bulls, as do many cities and municipalities.

But Molly didn’t see any of those things as negatives. She saw an opportunity to love and be loved. 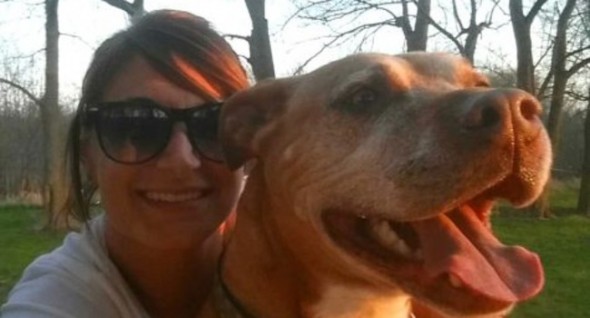 “It made me realize that not only did I need someone to save me, but I needed to rescue Cossack from living in a shelter for the rest of his life, since he was already six years old,” she says. “Older pets and pets with disabilities get looked over, and I truly believe we saved each other!”

Now, three years later, Cossack is a happy 9-year-old senior and the pair are still together, going strong. They moved back to Indiana to be close to family. For Molly, Cossack’s age was a benefit. She wants others to know that mature dogs have so much to offer, even if not quite as many years as a pup, that the temperament of an older pet is often more suitable to veterans looking for a reassuring presence in their lives.

“I adopted Cossack in 2013 and he completely changed my life for the better. Cossack made me get out of the house rather than falling into depression even further,” the Navy veteran shares. “He has made me get back into shape and just truly saved my life.”

“So many veterans have serious challenges making the transition from service to civilian life, and through our program find that a companion pet can help them reconnect with the people and activities that make their lives complete,” says Beth Zimmerman, founder and executive director of Pets for Patriots. “And we love in particular when an overlooked pet – one who is mature, or special needs, or a misunderstood breed – is both savior and saved.”