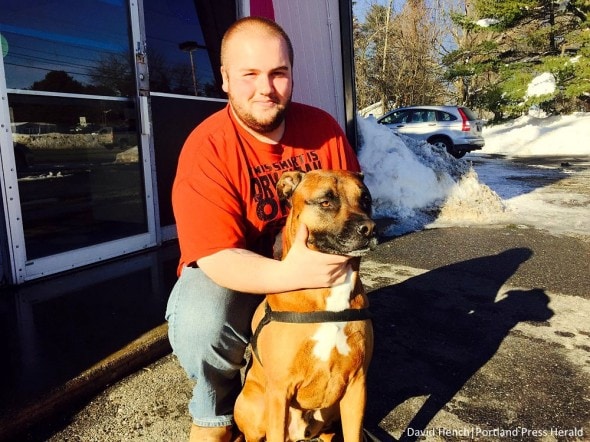 A dog named Thor became a superhero on Tuesday when he was able to stop a mask-donning robber who tried to hurt his owner at a gas station in Maine.

Justin Ireland was working at Holly’s Gas in Saco, Maine when a masked man walked up to the door of the office and asked to use his phone.

Thor was excited, because he doesn’t usually get visitors in the back, and Ireland had to restrain his boxer-pit bull mix with his knee.

At first the worker thought nothing of the man’s appearance, because it’s cold outside, but he refused the request, as he doesn’t let anyone use his phone.

The man pulled a gun on Ireland, and shoved him as he demanded money.  At first he was startled, but Ireland quickly realized that the man was threatening him with nothing more than a BB gun.

“I went from nervous to pissed off,” he told the Portland Press Herald. “I said, ‘I can’t believe you have the (gall) to pull a BB gun on me.’”

The flustered man insisted his piece was real and attempted to shove Ireland again.  Thor bounded over his leg and lunged at the BB gunman.

“Once he came at me the second time, that’s when Thor went after him,” Ireland said.

The man bolted, and Thor was pulled back into the office.  Ireland attempted to chase the man down, but he lost his footing on the snow, and the masked man made it to his truck and sped away.

Police who later reviewed the security footage said Thor bit both sides of the man’s face, but Ireland believes that with the mask on, he didn’t break the skin.

The potential robber was wearing a dark blue Gap hoodie, black pants, black and gray gloves, a winter hat and a dark green mask with an orange lining over the bottom of his face.  His vehicle is a light blue newer model Chevy Silverado extended cab pickup.

Anyone with information on the man’s identity and whereabouts is advised to call Saco police at 207-282-8216.

Ireland said Thor was 11 months old when he got him from a woman who could no longer keep him because she was moving in with her sister.  The shelter he would have gone to likely would have put him down because he is part pit bull.

But since he became a hero, the praise has come flying in.  He was also presented with a big bag of dog treats.