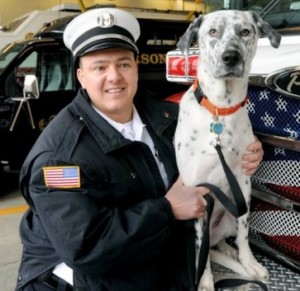 Adopted from an area shelter, Tiller the fire mascot has been returning the favor ever since his swearing in last year. The rescued dog works six days a week with his owner, Springfield Fire Department Captain Mike Richard. The two visit area shools and give fire safety presentations together.

“The dog is with me 24/7. I get one break one day a week when he goes to doggie day care in West Springfield. That’s where he gets his socialization skills with other dogs. Beyond that he’s with me constantly, in my car, with my family, with the department, and throughout the community teaching fire prevention and fire safety,” said Richard.

Judging by his popularity, the demand for Tiller’s services won’t let up any time soon. Richard has been with the Springfield Fire Department for 14 years, and said Tiller has been an immensely popular addition to the team. “There was a lot less phone calls I can tell you that. Everybody wants this dog now, at every single event.”