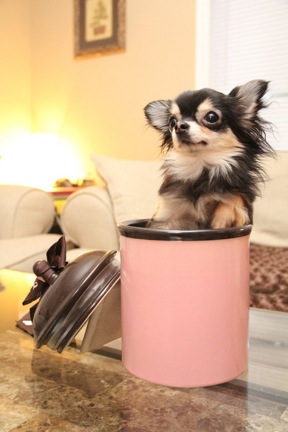 In the town of Hamilton, NJ, a tiny little Chihuahua is making a big name for herself as the Guinness World Record holder for smallest dog model. Weighing in at only 2.5 pounds and 6.5 inches tall, Bebe is a tiny 4 year old longhair Chihuahua that can fit in a teacup!

Bebe’s owner, Nikki, Maksymovich, stated that Bebe was given the title after she was seen posing in a variety of different fashions on a website that she and her husband created. After a phone call from Guinness officials, Bebe made the record books.

“I saw one of our friends has the world’s smallest dog, and I know she’s really tiny, but she’s not the smallest dog,” Nikki Maksymovich said of Bebe. “I thought, ‘She does model, so she might as well try it out.’”

Bebe’s original certification from Guinness got lost in the mail, but a replacement arrived only 3 weeks later. The letter confirmed Bebe’s spot as the world’s smallest modeling dog.

“She’s the first one that’s gotten it, so she started the category,” Maksymovich said.

Bebe is well known for her signature look, when she poses facing away from the photographer and looks back over her shoulder.

A diva on the runway, Bebe’s big ego follows her at home too.

“She has a crush on [my husband], so she’s always competing with me for his attention,” she said. “She gets jealous over kisses, and if I give a hug she’ll try and get in the middle.”