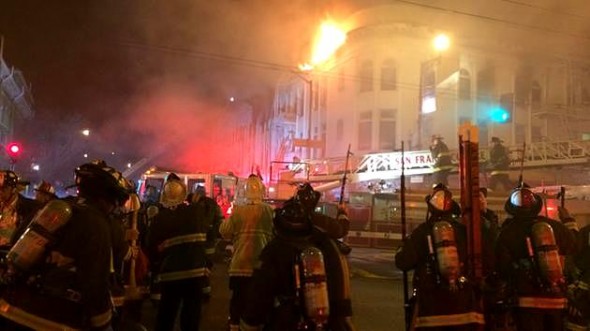 A Chihuahua was rescued from a blazing building in San Francisco hours after the fire began.  Another dog’s life was saved when his 13-year-old family member tossed him out a window before jumping into the arms of officers on the ground.

A fire broke out in a multi-purpose building in San Francisco’s Mission District around 6:45 pm on Wednesday.   Though the building passed a routine fire inspection two years ago, residents say they didn’t hear fire alarms go off, and fire escapes were blocked off. 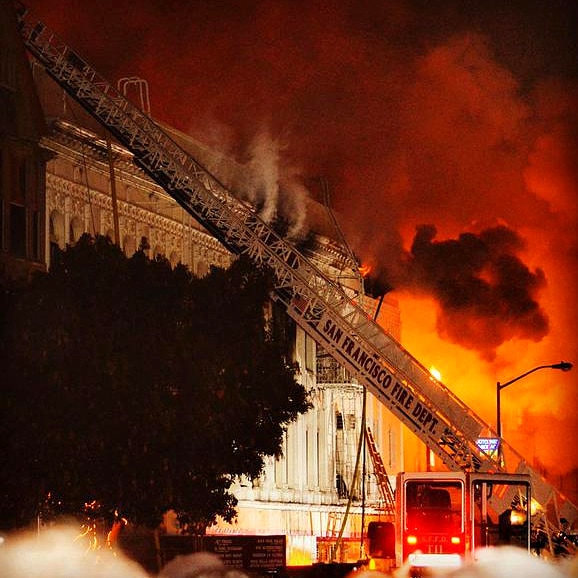 “I guess around 6:35 p.m. or so I heard somebody shriek on the second floor and then didn’t think anything about it because there are kids up there and they run around a lot,” said resident Matthew Graham.  “About five minutes or less later, I saw the fire trucks pull up on Mission Street and I looked out the window and they were looking up at us.”

Over 100 firefighters arrived to battle the four-alarm inferno.  Sadly, one man died and six others were moderately injured.  After several hours, a defensive decision was made to let the fire smolder after large flames were extinguished.  At 10 pm, a portion of the roof collapsed, and flare-ups were still being monitored. 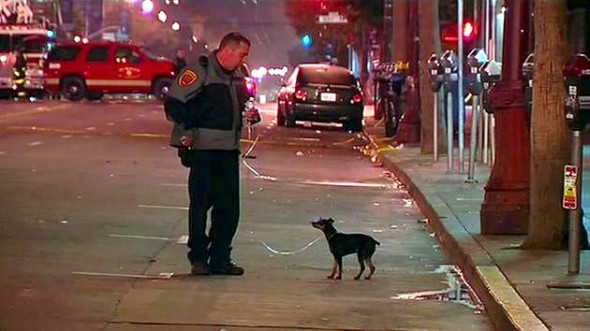 At 3:30 am, a wave of joy washed over the crowd.  On the third floor of the building where the apartments were, a small dog was found alive.  Firefighters marveled that he was unscathed.

“This was well into this, about eight hours into the fire,” said Fire Chief Joanne Hayes-White. “My understanding is that the Chihuahua had a tag so we were able to bring the dog to the resident who lost everything, but has his or her dog. So, it’s a big deal.”

It was certainly a big deal for 13-year-old Alessandro Gonzalez, who made sure he grabbed his dog before rushing out.  He was forced to smash the window open to get out, and got down the fire escape to the second floor.  Then he had to jump.  Police told him to throw the dog to them, which he did, and then he jumped. 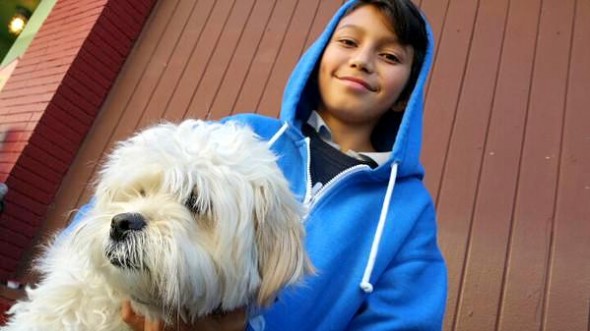 He and his dog were reunited with his mother, who was anxiously waiting outside.  They are doing well, but the family is sad that they were not able to get their pet rabbit out.

The fire, which is under investigation but is not believed to be arson, has displaced 54 residents and 20 small businesses.  Sollega CEO Elie Rothchild had fish in his office, and is hoping they are still alive.

A fundraiser has been set up to try to help the residents reclaim their lives.  If you would like to donate, please click here.