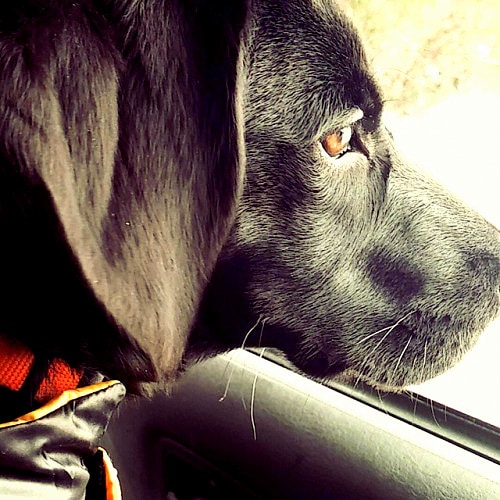 This comes from The Animal Rescue Site.  In addition to featuring rescue stories, they sell unique and reasonably priced merchandise – everything from clothing to gardening items.  For every purchase made, sponsors donate food to hungry shelter animals.

I deliver packages during the winter, and one Friday, passed this soaking wet little puppy beside the river that one of my roads follows. I knew I could get fired if I picked it up, despite it being winter, and I just prayed that he’d be safe.

After my packages were delivered and I was headed home, I couldn’t rest without knowing that that pup had been picked up. My heart sank when I saw him in the same exact spot, dried but still shivering, four hours later. I scooped him up, and made the decision to keep him until Monday, when I’d drop him off at the pound.

I didn’t even get home before that plan changed. I checked for microchips, called pounds and vets, let them know I found this little black-lab puppy, posted signs, even asked around at work. And one person said, “Oh, that’s very common for that river. People just throw puppies over the bridge and drive away.” I was horrified.

Two years later, and he is the best dog I’ve ever had. I don’t know who decided to throw a six-week-old pure-bred black Lab puppy over a bridge into freezing water just before Christmas, but I want to thank you, because you threw away a GREAT dog, and gave me my best friend, partner, companion, and now service dog.

Submitted by Tara of Columbus, OH