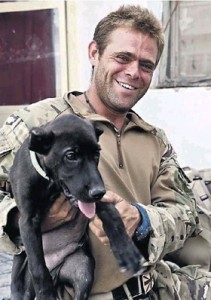 An abandoned, tortured puppy has traded the mean streets of Afghanistan for the relative safety of London after it was rescued by a Royal Marine.

Commando Alex Mutch was moved to act on behalf of the tattered stray after finding him in the village of Sangin with his ears and tail cut off. He was able to trade a packet of flares with a local for the dog (now named Dave) and whisked him back to base, where he set about coordinating a rescue mission.

“I was on a police mentoring team in Sangin and they brought the dog in one day looking all skinny with no tail and no ears and the guys were kicking and shouting at him. I thought I’ve got to get him away from this so I swapped him for a packet of flares. He was really vicious first of all because he was used to being mistreated. But after a couple of days he was all right,” said Mutch.

Mutch told his sister, Heather, that the dog would not likely survive if he left Afghanistan.  Heather set up a charity and quickly raised more than £4,000 before enlisting the help of  rescue group Nowzad, which specializes in saving strays and abandoned animals in Afghanistan and Iraq.

Thanks to their combined efforts, Dave was flown to Britain last month, and is staying with Heather while her brother finishes training in Plymouth. In a statement to local reporters, she said: “Dave gets some strange looks when he goes out because he has no ears. It’s likely that they were cut off with a knife to be used for fighting. He’s a very loyal dog but when Alex is here he doesn’t want to know me. He knows Alex saved him.”