In 2004, Officer Mike Kralicek was shot in the face by a suspect that opened fire on law enforcement agents during an arrest attempt.  Mike had a service dog to help him get around, but that dog took ill and couldn’t really keep up with helping Mike with day to day stuff.  Upon find this out, a local trainer of service dogs donated a new service dog to Mike.

Despite his physical impairment, Mike strives to help others.  He gives motivational speeches to law enforcement teams across the country.

“Since my voice still works, I could try to share my experiences and knowledge with other people,” said Mike.

Jackie Geller works the emergency room at Sacred Heart Hospital in Coeur D’Alene, Idaho.  She knew of Mike from the time she spent assisting with his injuries and talking with Mike’s wife on visits to him in the hospital.  When she found out about Mike’s service dog getting sick, she knew she had to help him out.

“He has far surpassed and had the strength and integrity to keep going forward and never lost hope,” said Jackie. “And now he wants to help other people, that’s so inspirational.”

Jackie got Mike in touch with her friend, Charlotte.  Charlotte owns and runs Vom Haus Vianden Kennel in Post Falls.  She just happened to have the perfect friend and service dog for Mike.  This past Saturday, she donated one of her highly trained service dogs to Mike.

“I love for people to be happy, and this dog is going to bring so much happiness to mike,” said Charlotte.

Charlotte plans on continuing the dog’s training with Mike over the phone.

Mike said he can’t be thankful enough for this generous donation.  He is very with his new service dog, and has continued to be a motivational speaker, and also enrolling in psychology classes. 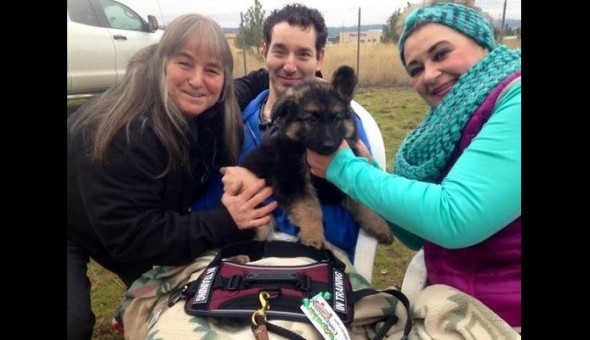