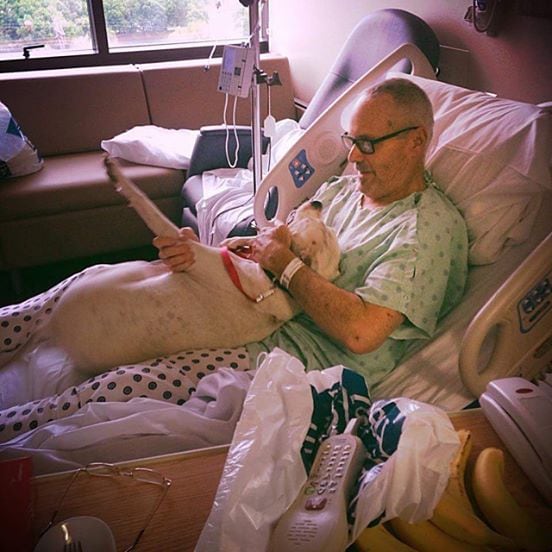 Chris Price and his dog, best friend and co-pilot Coco are a “bonded pair” if ever there was such a thing.  They go everywhere together, even on long haul trips.  One day while at a truck stop, Price had a medical emergency that required extended hospitalization.  Not only was his own life in the balance, but he almost was separated from Coco permanently.

On April 24th, Price was loading his truck for a haul, when he noticed that he didn’t feel well.  Little did Price know of what was to come that day.

“When I loaded I couldn’t even move, so I took a two-hour nap, and went a couple miles to a truck stop and collapsed,” said Price.

An ambulance was called to the truck stop, and brought Price to the hospital.  The whole time, Price seemed to be more concerned about that was going to happen to Coco.

“911 had to deal with the dog, they can’t take me to the hospital and leave the dog in the truck,” Price said.

Animal control decided to hand Coco over to the KC Pet Project.  They can only hold a dog for ten days, and to call conditions there overcrowded is an understatement.  Someone’s always waiting for an open spot.

“Going to the pound 500 miles away from home, you just don’t know what’s going to happen,” said Price.

When Price found out that he had a staph infection that went into his bloodstream.  This prompted Price to call Stephanie Bell from KC Pet Project, as that hospital stay was going to be a lot longer than ten days.

“You have someone here who’s stranded where they don’t live, with no assistance just because of the nature of where they’re at — out-of-state,” said Bell.  “You kind of empathize with someone in that position.”

The KC Pet Project posted information about the situation with Coco and Price on their Facebook page.  The post got over 6,000 “likes” and was shared almost 1,000 times across the site.

“It’s unbelievable… I tell this story to my friends and they don’t believe it,” said Price.  “She’s just really important to me.”

Both Price and Coco are being transported back to their hometown, and each is doing very well.