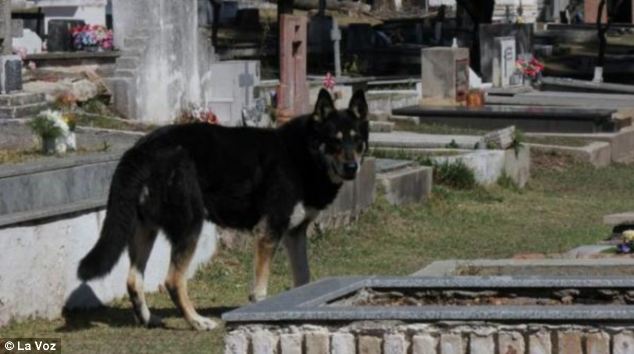 Ever watchful, Capitan guards the final resting place of his friend Miguel Guzman. He has loyally spent every night at the cemetery sleeping on the grave of his owner.

Argentinian Miguel Guzman brought Capitan home as a present for his son Damian. Tragically, one year later Guzman died suddenly. Capitan ran away and his family feared him lost. Imagine their astonishment when they went to pay their respects to their husband and father and found their lost dog sitting beside Guzman’s grave. Capitan was grieving for his companion. According to Veronica Guzman, Mr. Guzman’s widow, “The following Sunday we went to the cemetery and Damian recognized his pet. Capitan came up to us, barking and wailing, as if he were crying.’

‘We went back the next Sunday, and he was there again. This time, he followed us home and spent a bit of time with us, but then went back to the cemetery before it started getting dark.

‘I don’t think he wanted to leave Miguel on his own at night.’

Cemetery director Hector Baccega recalls that, “he turned up here one day, all on his own, and started wandering all around the cemetery until he eventually found the tomb of his master.

‘During the day he sometimes has a walk around the cemetery, but always rushes back to the grave. And every day, at six o’clock sharp, he lies down on top of the grave stays there all night.’

The cemetery staff are so impressed with Capitan’s unending love for Mr. Guzman that they provide him with food and water and care for him.

Mr Guzman’s son Damian said: ‘I’ve tried to bring Capitan home several times, but he always comes straight back to the cemetery. I think he’s going to be there until he dies too. He’s looking after my dad.’ 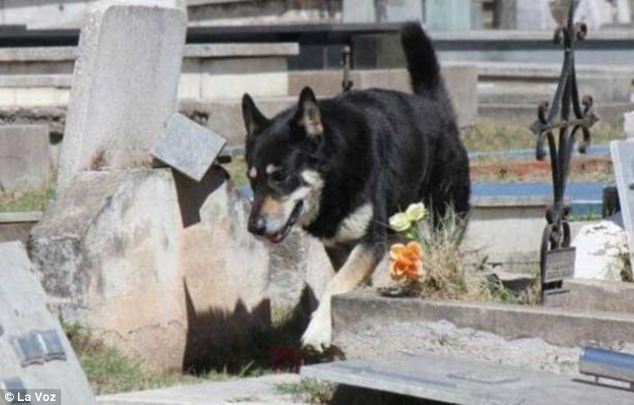