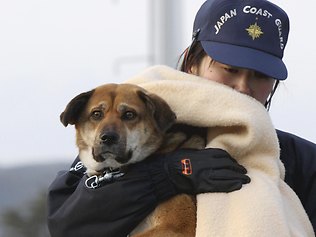 An emotional reunion marked the conclusion of a miraculous tale of survival from Japan.

The dog was spotted floating on the roof of a house last week, 1.1 miles from the coast of Kesennuma in northern Japan after spending three weeks adrift at sea. A local television station captured aerial footage of the thrilling rescue.

The owner of “Ban” recognized the dog after footage of her rescue went viral last week to the cheers of animal rescue workers and dog lovers across the globe. The woman said she recognized Ban from footage of the dog being hugged by Japanese Coast Guard members while being examined on a boat in Shiogama Port. 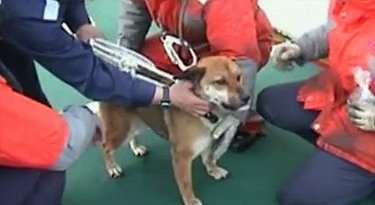 Given the media frenzy surrounding recent animal survival reports, Ban’s owner has asked to remain anonymous. Rescue workers said the dog wagged its tail and jumped into the waiting arms of the woman as soon as it recognized her.

“I recognized her immediately after seeing her face,” the woman said, hugging the animal. “I am happy that she seems healthy. I want to cherish her when I take her back,” she added, as Ban kissed her face.

Footage of the reunion: