When Bo was found half dead, and badly injured from being hit by a car, no one really gave him very good odds on survival.  His injuries were bad, and was emaciated from being out on the streets for over two weeks.  Not all hope is lost though.  Thanks to some very special people, and a good Samaritan that stopped to lend a hand, Bo just might pull through.

Michael Rodriguez was on his way home from work when he found Bo.  He was more or less half in and half out of the street, and people were just swerving around him.  No one would stop to help, so Michael did.

“I could tell they were watching something, but I couldn’t make out what it was,” he said in an interview with The Dodo.  “Then I saw it was a dog.  He was kind of halfway on the road and halfway out.  He was kind of right on that white line.”

Michael pulled over and got out to help.  He very gently got Bo into is vehicle, and took off for the animal hospital.  He knew that he had to help, and became a link in a long chain of people that are pulling for Bo.

“My family has always instilled that compassion for animals.  If we’re not there for them, no one else will be,” he says.

When it came time to discuss payment for Bo’s medical bills, Michael didn’t hesitate one second.  He pulled out his credit card to pay.  He would do whatever he had to, in an effort to save Bo.  However, and early estimate of how much he was looking at was about $6,000.  There were going to be a lot of tests needed before anything could really be done for him.

This is when Michael’s mother took charge, trying to find anyone that was willing to help.  She got a hold of Jackie O’Sullivan with Rescue Dogs Rock NYC.  She was willing to help, but Bo would have to be brought from South Carolina to New York.  That’s when she contacted Paul Steklenski with Flying Fur Animal Rescue.

“She called on Saturday and I said, ‘I don’t know if I can do this.  I can’t necessarily afford it,'” said Steklenski.  “Once you know that you’re the only real missing link, how do you say no to that?”

Rescue Dogs Rock NYC picked up the rental fee on the plane, and Steklenski picked up the cost on the fuel.  Bo was going to get the ride he needed, to ensure that he get the treatment he badly needs.  The trip had to be undertaken gingerly, and moving Bo around too much was extremely painful.

He did make it and medical professionals started working on him right away.  He still has a long way to go, but with all of the help he’s been getting, his odds of pulling through are much better.  Would you like to help Bo on his journey?  Click here for more information. 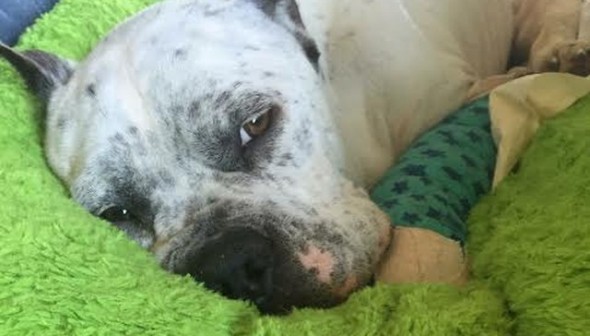