An unanticipated rescue mission is the basis for this heartrending report from CBS correspondent Lara Logan. 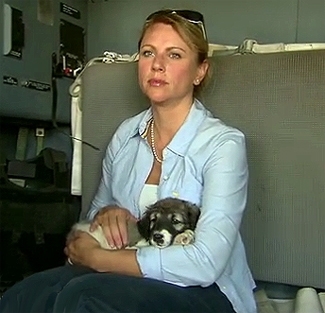 It involves heroics, but no gunfire. It involves US Marines, military transport pilots, a CBS bureau chief, and “60 Minutes” correspondent Logan– all breaking the rules to rescue a little puppy named Bill.

Logan spoke with Overtime editor Ann Silvio about the story of Bill. She first met the dog while on assignment in Afghanistan. Logan and producer Tom Anderson met a group of Marines from the 1st Battalion, 23rd Marine Regiment, who had taken on a special assignment: saving Bill, an orphaned puppy that was fighting for his life.

“You know, everyone has this image of Marines as jarheads and door-kickers” said Logan. “But when we got to this patrol base, we saw these guys sitting around caring for Bill. I just watched for a little while, and it was very clear from the first moment that all these Marines loved this little dog. They were mad about him.”