Being a teen isn’t easy for anybody, but being gay and having bipolar disorder certainly add to the challenges of growing up.  Will, a teenager from the UK, was going through hell and even came close to killing himself, but his rescue dog, Fred, saved his life.

This story comes from The Animal Rescue Site, which in addition to featuring fan-submitted rescue stories, offers a wide selection of clothing, décor, pet supplies and other unique items.  For each purchase made, a food donation is given to shelter pets in need.  Now is the perfect time to buy gifts for the fellow animal lovers in your life! 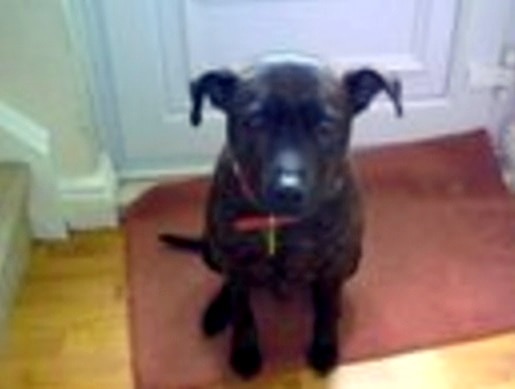 Sorry for the terrible quality, it’s the best photo I have.

We were just going to the local market to buy some Christmas gifts, and we stopped at the animal rescue centre nearby to make a donation. We had a walk around and I saw him; he was sat right in the back corner of his cage, sad, lonely and scared. He looked at me as I crouched down, and someone who worked there opened the gate. He slowly made his way over to me and allowed me to stroke him, his eyes fixated on mine. About an hour later he was laid on my knees as we drove home.

I was that awkward teenager; serious introvert, few friends and major trust issues. They told us Fred hadn’t had a great start to life either – I didn’t want to know the details. He slowly became my best friend and I opened my heart to him. I have bipolar disorder, he stood by me. My parents divorced, he stood by me. Losing friends after coming out as gay, he stood by me. That dog was my rock; he pulled me from the brink of suicide on many occasions.

Fast forward to about a year ago, I had more confidence and had grown up a lot, more friends, a job, things were better. Someone left the gate open when I was at work, Fred had got out and got hit by a car. My boss drove me to the vet’s when I heard. I saw him: he was barely alive, he had massive internal bleeding, but he still tried to get to me.  I just held his head and kissed his nose. He just looked at me as the vet gave him the injection. I’ll never forget his eyes.

I am slowly recovering but it still hurts. Don’t pity me, pity anyone who mistreats or neglects animals. I urge anyone reading this who wants a dog: save a life and go to a rescue centre, you will not regret it.

I love you Fred, I’ll see you at the rainbow bridge.

Submitted to The Animal Rescue Site by Will of Sheffield, United Kingdom