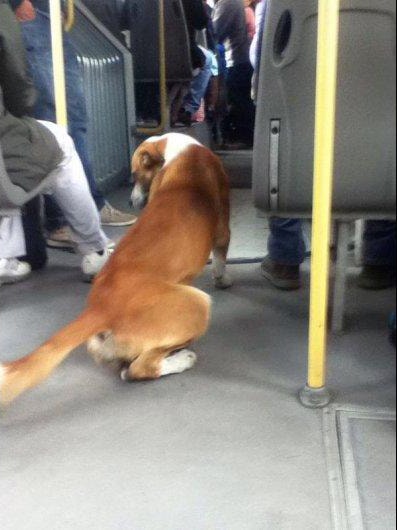 Last week we told you about a four-legged commuter who was rescued from a bus station in Lima, Peru, after it traveled by bus quite some distance. Well, after spending a few days fostered by his guardian angel, Aidé Montero, and after becoming very famous on newspapers and social media outlets, the dog was claimed and reunited with his rightful owners.

Read “Dog Follows Owner, Hops on Bus and Gets Lost” to learn more.

Montero and other two legged commuters believed the pet got lost in the mass transit system after following his owner on the bus. People assumed that rush hour and its large volume of commuter contributed to the dog getting lost, but the reality is that the four-legged bus passenger got lost a month and a half and was just riding the bus while it survived life on the streets.

Anthony Montero, Aidé’s son, said the pet’s owner had been searching for the dog ever since he got lost, but they had not had any luck finding him. Thanks to the power of social media and the outreach of local newspapers, the pet’s owner learned their furry family member had been found and rescued by Montero.

The dog owners contacted Montero via the information published by news outlets, and  they met to be reunited with the month-long lost friend.