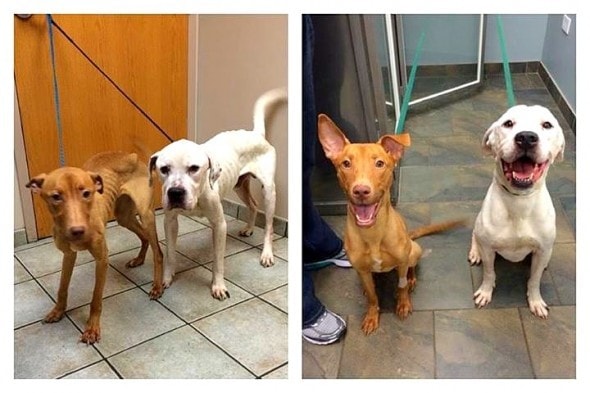 You might remember our story from a couple weeks ago about Emmy and Oscar.  Both were rescued in deplorable condition, nearly having starved to death.  Emmy quickly found a home once she was healthy, but Oscar needed intensive behavioral rehab.  Now he has finally found his home!

This comes from the Trio Animal Foundation:

OSCAR HAS FOUND HIS FOREVER HOME!!!

On July 6th, TAF received a call that the Chicago Police Department had just rescued two dogs from an abandoned building and needed assistance getting them emergency medical care. At 1 am, TAF met the officers at the ER Vet and Emmy and Oscar (white pup) were transferred into our care.

Oscar weighed in at only 45.6 pounds, his body had already gone into starvation mode and he was suffering from hypophosphatemia. This meant there was not enough phosphorous in his blood, which caused a reduction in the amount of oxygen getting to his heart, red blood cells, skeletal muscle cells and brain cells. Oscar was in critical condition and his body was dangerously close to liver failure. 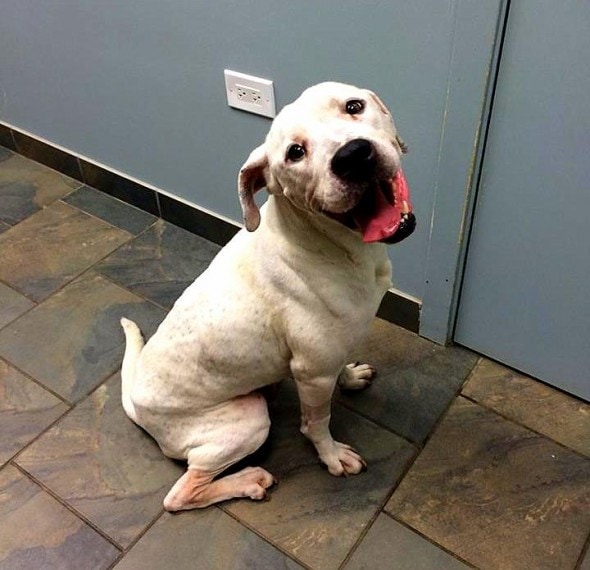 Oscar remained hospitalized for quite some time and was started on a slow feeding regimen to prevent “refeeding syndrome” that could overwhelm his starved system and cause organ failure. Several small, high fat meals were fed over the course of the day to slowly allow his body to adjust.

After three months of extensive medical attention, Oscar put on almost 20 pounds and received a clean bill of health. During this time Oscar was started on a rigorous training program. This included weeks of one on one training and then led to two weeks of board and train. The board and train was an immersion program consisting of Oscar going to his trainer’s home to practice his obedience and manners. Oscar also practiced some agility for fun, attended training classes and went on field trips.

Early last week we received an adoption application for Oscar that had the potential to be “the one.” Tyson was an experienced dog owner with plenty of dog knowledge, and he also had an American Bulldog female named Aspen. The next few days involved lots of information sharing, a home visit and finally Oscar’s introduction. Tyson and his fiancé, Emily, along with his daughter, niece, and puppy Aspen came to meet Oscar over the weekend. 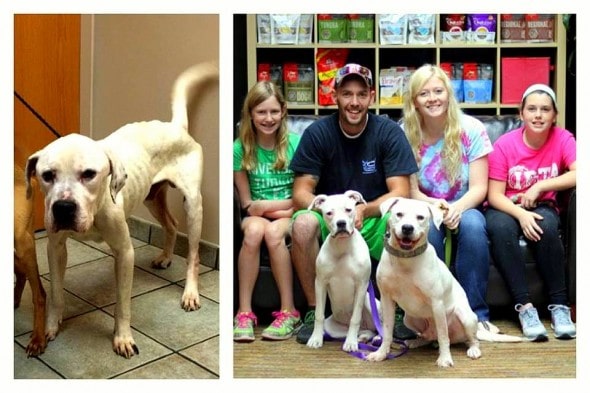 Oscar immediately bonded with Tyson, happily falling all over Emily and the kids. He had a goofy, giant smile on his face, and frankly, so did we! Oscar and Aspen played happily, bounding around together. The trainer who had spent weeks working with Oscar was there as well, and she reviewed all that Oscar had learned with the family.

It didn’t take long to realize that Oscar had found his new people, a family who would keep up with his training while providing a loving, safe and fun home that our brave pup so deserved.

A big thank you to the Chicago Police Department, Oscar’s medical team (Animal Ark and HEAL Veterinary Clinics), TAF supporters, Unleashed Pups and Canine Sports Dog Training for giving Oscar this second chance at the life that he always deserved.

With an immense will to live, Oscar was able to beat the odds and prevail where most would failed… he lived up to his name and truly came out a winner.