Two weeks ago, we told you about a pair of puppies heartlessly discarded in a scorching hot Chicago alley to slowly die in a box.  They have parvovirus, which is fatal if left untreated.  Since being taken in by Trio Animal Foundation, they have been receiving excellent medical care, and are now flourishing.

Here is Trio’s update on one of the cutest pairs of siblings ever:

Just two weeks ago TAF was contacted about two tiny puppies who were left in a box in an alley in extremely hot, humid temperatures. After rushing them to the vet, we learned both puppies had Parvo, an often deadly virus that attacks the intestines of dogs. We were seriously concerned that the puppies wouldn’t survive given their size (each weighing around two pounds), their age (approximately eight weeks), and the fact they were so dehydrated and sickly after being outside in the heat with no food or water. 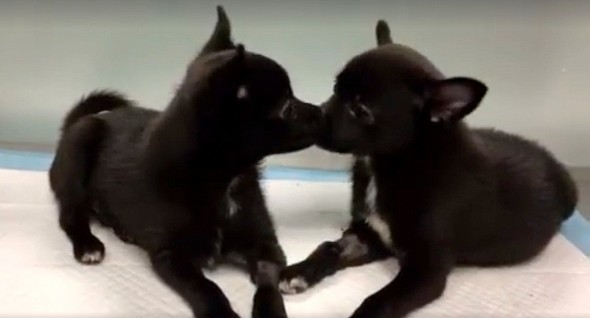 After being at the emergency vet for several days on supportive care that included IV fluids and antibiotics, both puppies have been back at our vet clinic where they have continued treatment in isolation on oral medication. Both Numees and Fox have gained some weight and are closer to three pounds, have great appetites and normal bowel movements.  (Fox is the little boy on the left and his sister Numees is on the right. We believe the both pups are Chihuahua mixes.)

The puppies are still shedding the deadly virus and will for the next two weeks. They must remain hospitalized since we don’t want to risk infecting any other dogs or any public environments, and our partner facility cannot take in puppies with this virus for obvious safety reasons. Numees and Fox get to play with each other several times during the day and it is quite adorable! For those who have asked, both pups need to be kept in separate cages so that their medical team can monitor fluid level, food intake, bowel movements, etc.

THANK YOU SO MUCH to everybody that has contributed towards Fox and Numees’ medical bills! In total, their medical bills are easily going to exceed $5,500 and your help has been appreciated!