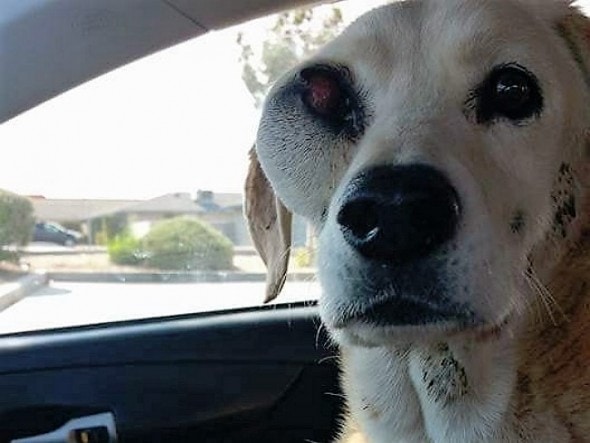 People were ignoring him, even shooing him away, but in the midst of the evacuation from the “Blue Cut” fire near Los Angeles, one Good Samaritan realized the poor dog was all alone.  Opening up her car door, the dog immediately jumped in, and when she saw his eye up close, in spite of her own urgent need to leave, she knew she had to get this sweet dog to a veterinarian right away.

This amazing woman drove to Ark Animal Hospital and asked if they could care for him, as she had to leave.  In turn, Last Call K9 Rescue‘s Kelly Reedy was contacted.  Then animal crowd-funding site FreeAnimalDoctor.org got involved.  The organization, a non-profit that pays vet bills directly to the provider, stepped in and set up to help pay the expenses for the dog who became known as Jack the Evac.  The dog had a tumor under his right eye that had to be removed as quickly as possible, especially as it was creating significant pain for Jack. He also had multiple tumors on his stomach.  In spite of all that, his tests came out well and he was quite healthy. 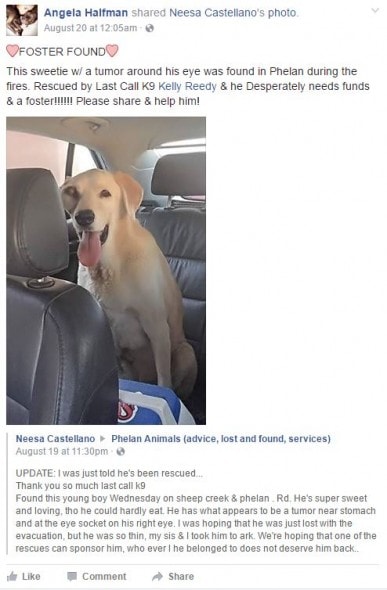 The kind woman who picked Jack up did not leave any contact information, but thanks to his picture making the rounds on social media, a woman called who claimed to be his owner and, as she had also evacuated, lost track of Jack, and is homeless, she chose to surrender him to Last Call K9 Rescue so the tumor could be treated.

Jack did get the initial surgery for both his eye and removal of the masses on his belly,  going home with his foster family on Thursday to recover, but donations are needed to help cover his medical expenses as additional surgeries are considered.  While Jack recovers and waits for a forever family, funds are being accepted on his directly on his behalf at Jack’s page on Free Animal Doctor.

All of the monies raised go directly to Jack’s care and funds exceeding the costs of his care will be donated to Last Call K9 Rescue.