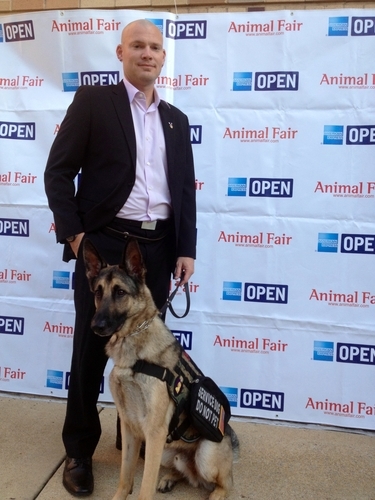 After serving three tours of duty, Captain Jason Haag with the Unites States Marine Corps struggled to adjust to life back home. Unable to leave his basement for two years and considering suicide Haag decided to try one last thing, getting a service dog. That decision saved Haag’s life.

When Haag returned home to Fredericksburg, Virginia from his last deployment in 2011 he struggled badly with his injuries and PTSD. He was taking 31 pills a day and drinking every night. The father of three children, he couldn’t make it out of the house to go to their ball games. As he continued to struggle he began to think his family would be better off without him.

Haag had become completely disconnected and rarely left his basement. As he contemplated taking his life he decided to try one more thing. His neighbor had a service dog so Haag looked into getting a service dog. After finding four organizations he was frustrated when the first three told him he’d be put on a waiting list that could take up to three years. He knew he couldn’t go on for three more years in his current state.

The last organization Haag tried was K9s for Warriors, a non-profit located in Florida. They had the good news that Haag could get into one of their classes in six months. In addition every week leading up to the class K9s for Warriors called Haag and checked in on him.

Finally the six months came and Haag was able to come down to Florida to meet his new service dog and go through a three-week training program with him. Haag was matched up with Axel and the difference in his life has been incredible. Haag not only now makes it to his children’s ball games he is coaching his 8-year-old son’s baseball team.

“There’s no doubt that Axel saved my life,” said Haag. “If I didn’t have him…If I didn’t have him, I wouldn’t be standing here today. It’s just nice to know I’ve got a battle buddy with me again. He watched my back, he protects me. He’s changed my life and the lives of my entire family.”