Marine Corps Veteran Frank Giarmida has a new best friend. He was surprised with the gift of a therapy dog, while on the field at MetLife Stadium during a Giants game.  All of this was in an effort to thank Giarmida for his service in the Iraq War.

“I see the dog come out and I’m looking at the screen, and I see a dog and I’m looking around and I didn’t even hear what the commentator said anymore,” Giarmida said.  “The last 10 years have been a struggle,” Giramida said.  “Six months ago, I recently lost my fiance to a brain aneurysm.  So this service dog is going to do a lot for me.”

Scarlet was trained by another Marine Corps named Amanda Donald.  She trains special therapy dogs for Paws of War, which is funded by Cow Harbor Warriors.  Cow Harbor Warriors is a not-for-profit group that raises money for post-9/11 war vets.

“They’ll take dogs from kill shelters, pit bulls, German shepherds, whoever and they’ll take those dogs and train them to be a service dog for a courageous veteran,” said Donald McKay, of Cow Harbor Warriors.

“This is going to be my best friend,” said Giarmida.  “I need a friend.” 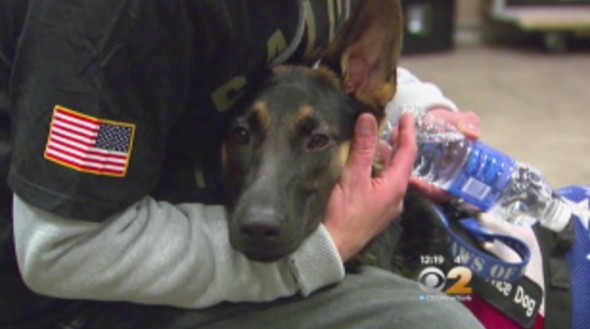