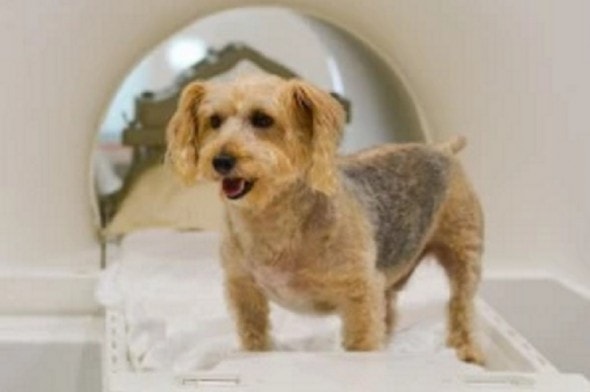 Sometimes, what sounds like a simple question, can wind up having a very complicated answer.  Questions like, “what was first, the chicken or the egg?” and countless others have kept us pondering their answers for generations.  So, we pose this quandary for you to puzzle upon: what does your dog prefer, a tasty snack, or verbal praise and extra attention?

Every night when I walk my 6-year-old Boxer, he knows exactly what to expect once he’s unleashed. His tail wags furiously, his body wiggles, and glistening drops of saliva drip to my kitchen floor.

Then it comes: a high-pitched “good boy” or a pricey, meaty treat. Typically, Beau gets both.

New research shows that my effort may be overkill.

According to the study, published online in the journal Social, Cognitive and Affective Neuroscience, more dogs prefer praise over food. The finding by Emory University neuroscientist Gregory Berns followed a novel method of investigation: He used an MRI to scan a dog’s brain while the dog was awake and unrestrained.

The “Dog Project” began five years ago. Berns, the author of “How Dogs Love Us: A Neuroscientist and His Adopted Dog Decode the Brain,” talked to dozens of dog owners in the Atlanta area and persuaded some to have their pooch’s brains scanned. The goal was to learn whether food is what dogs “really care about,” Berns said.

“Is social reward on the same footing as food, or is it potentially more valuable?” he wondered.

Berns selected dogs that would lie still for 30 minutes while awake and with the MRI running. High-energy canines didn’t make the cut; couch potatoes did.

“These are not super-athletic, high-drive dogs,” he said. “Lots of retrievers.”

He and his team conducted a trio of experiments with about 15 dogs scanned each time. Every dog had to go into the MRI and stay in a down position for three, 10-minute scans.

In the first experiment, participants were shown a hairbrush, a toy car and a toy horse. They were given a hot dog following one object, praise after another and nothing for the third.

The results showed that for 13 of the 15 dogs, their brains were stimulated by the praise just as much, if not more than, the food.

The second experiment sought to confirm the initial pattern. But this time, a subset of dogs didn’t get praised. The results were “almost identical” when looking at their brain activity, Berns said. “The dogs who responded more strongly to praise in the first experiment were more disappointed for not getting praise.”

The third experiment took place outside of the MRI to see if the dogs’ response in a maze mirrored that during their MRIs. Once inside the maze, they had to choose between finding a bowl of food and getting praise from their owner. Researchers determined that the outcomes of the first two tests were a “strong predictor” of a dog’s choice.

So what does this mean for the average pet owner?

Ultimately, Berns said this week, the research shows that dogs are primarily motivated by praise. That insight can greatly impact how they get trained, both as pets and potentially as service dogs.

And with many owners today focusing on “positive training,” the study suggests that social rewards are as effective a motivator as food treats, he said.

The findings could also help identify which dogs might be most successful as service dogs.

How can you tell what your dog prefers without an expensive MRI? “I think people have an intuition of that,” Berns said.

For me, the big takeaway is that I might save a few bucks at the pet store and potentially make Beau happier just by opening my mouth.