Usually, people don’t think of animal rescues and bands as being partners in adoption efforts. However, one such unconventional partnership resulted in an upbeat video highlighting the joys of adoption.

Videos encouraging people to adopt or advocating animal rights are sometimes a bit gruesome and, though impactful, not very family friendly.  They tend to work on shocking people, which is sometimes necessary to awake people from their apathy. 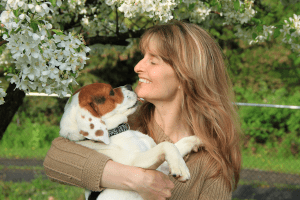 However, Dog House Adoptions’ Kim Clune had a different sort of video in mind to encourage and highlight adoption-one that would make people smile in the end and believe that there is hope for rescued dogs.  This would also be in line with Dog House Adoption’s mantra of maintaining a sense of humor in all they do.

Clune contacted the band, Stray Dogs, after stumbling on their site while looking for online coverage of actual strays in 2012.

“Music, while not what I was looking for, was a welcome distraction. So I nosed around their site a bit.”

Stray Dogs is locally known for playing an eclectic mix of high energy dance music, reggae, blues, country, and, according to their website, “whatever the moment calls for.”

Clune began to wonder whether the band would be true to their name and be willing to write a song specifically for rescues. Clune noted that they shared the same home county (Rensselaer County, New York) and the “stray dog” connection, so they seemed natural partners for helping the real strays within the community.  So, she emailed them pitching the idea.

There was not much response for a while, until suddenly Kim received an email:

“Just wanted to let you know we are working on your song, and it is coming along nicely!”

Bassist Jeff Maynard had crafted the words to “Pick Me” and the band prepared for performing the song. Within a couple of months, they worked in the studio and had a disc ready.

Clune then created a video highlighting 35 dogs’ adoptions, using Stray Dog’s song, “Pick Me.” The video goes back and forth between fun shots of the band and various shots of dogs that were rescued and/or adopted, illustrating the joy of adopting a new family member and that a dog is a commitment for life.

Amazingly, Stray Dogs donated the song both for the video and to any other rescue that wishes to use it. Dog House Adoptions has also emphasized that the video is not only for their own use but to encourage all dog lovers to adopt.

It is yet another example of collaboration for the benefit of our furry companions. You are sure to fall in love with the dogs and to want to go to your closest animal rescue and adopt after watching!