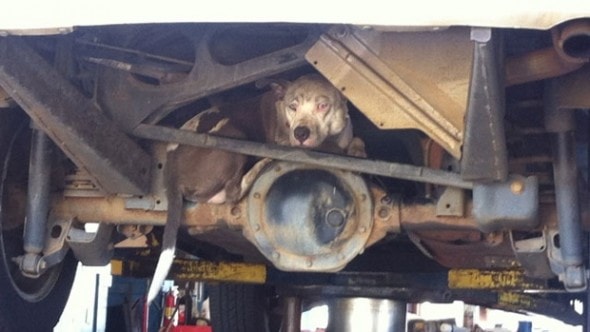 A woman from Jackson, Mississippi was driving one day when she heard an odd noise coming from under her vehicle.  She went to an auto repair shop that was local to her, and what they found under the car was something no one was ready for.

The car was pulled into the parking lot at Scotty’s Tire and Automotive, and the car sat ther for about two hours.  No one noticed anything special about it, but when the technician got in to take the car for a test drive, they heard the noise too.  They just figure out what was causing the irregular noise.

They pulled the vehicle into the lot and onto a lift.  The put the car up into the air, and saw a tail come dangling out from under it.  There was a dog stuck under there, and everyone feared the worst from the get go.

After the two auto techs took a closer look at the dog, they realized that the dog was still alive!  They quickly did everything that they could to get the dog out of there, still fearing a medical disaster once they got him out.  However, that was not the case.

When he was safely out from under the vehicle, they looked him over, and actually, there didn’t seem to be a whole lot wrong with him medically.  He was looked at by a vet, and it was also found that the dog was a stray with no listed human.  The woman that brought the car into the shop that day and had a dog that needed to be rescued from under it, ended up adopting that very dog.

The mechanics are just happy to know that the dog has a good life ahead of him with his new human.