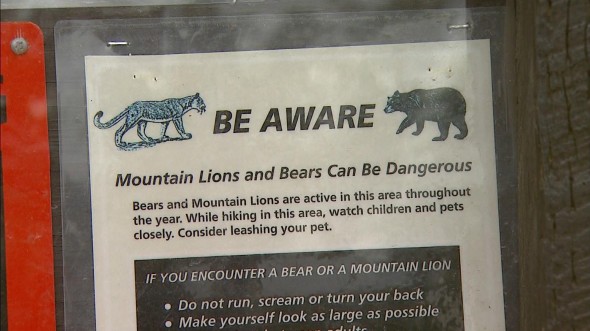 A woman and her dog were chased by a bear in Boulder, Colorado while trail walking.  Authorities in the area of Chautauqua Park have issued a warning, reminding others to take extra precaution when walking in the same area, and to keep dogs on a leash to prevent any tragedies from happening.

The incident was reported to have happened while on the Mesa Trail.  They were not far from the National Center for Atmospheric Research when the two walkers came across a large bear.

Both the dog and woman are just fine after their hair-raising experience.  The dog wasn’t on a leash according to reports, but authorities say it’s one of the easiest and best ways to keep your dog from running away or after the larger more dangerous animal in an attempt to defend you.  All people walking dogs must leash them until further notice by officials.

Local resident Sandra Snider and her walking buddy Sam always take extra measures to help keep them safe while trail walking.  Sam wears a collar with a “bear bell” on it.

“Number one I can keep track of him on the trail,” Sandra said.  “And the other part is he can go ahead and alert the bear that I’m on my way.”

“We ask people to always use leashes because of how much wildlife we have,” said Jennifer.  “We think it’s the safer way to go to protect wildlife and to protect your pet.”

The leash restrictions are temporary, and rangers will lift the no-leash ban as soon as they feel it will be safe again.  Considering the meeting was animal-to-animal and no one was harmed in any way, thankfully no actions against the bear will be taken.