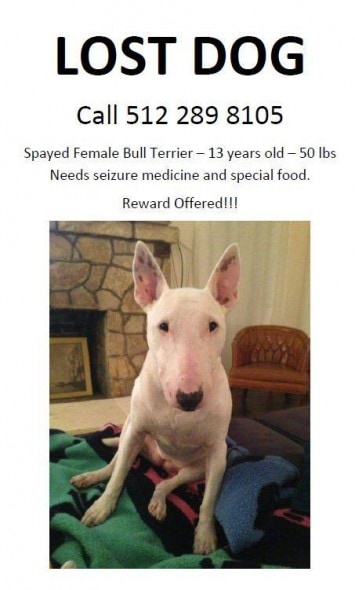 “If you have any kind of conscious or heart, or anything, you should take her to a shelter, to a vet,” Hardie told KXAN News. “Just give her back.”

Hardie has owned Rica for over a decade. She took the canine in when the pet was just six-weeks-old. When Rica was 18-months-old, Hardie moved out of the country and left her canine best friend with her ex-boyfriend, who took excellent care of the dog. A year later, Rica and Hardie were reunited and since then they have become inseparable.

Since Rica was stolen 6 day ago, Hardie has spent her days posting fliers and searching for her pet. Rica suffers from epilepsy and for Hardie it is unbearable to think her pet is sick and in need of her medication.

“Whatever you think she’s worth to you is nothing compared to what she means to me,” said Hardie. “She can’t have puppies, she’s not a fighting dog, none of those things. She’s my companion that I’ve had for over a decade.”

A reward is being offered for Rica’s safe return. If you know the dog’s whereabouts, please contact 3-1-1 or animal control.

You can learn more about Rica’s search and safe return home on Facebook.