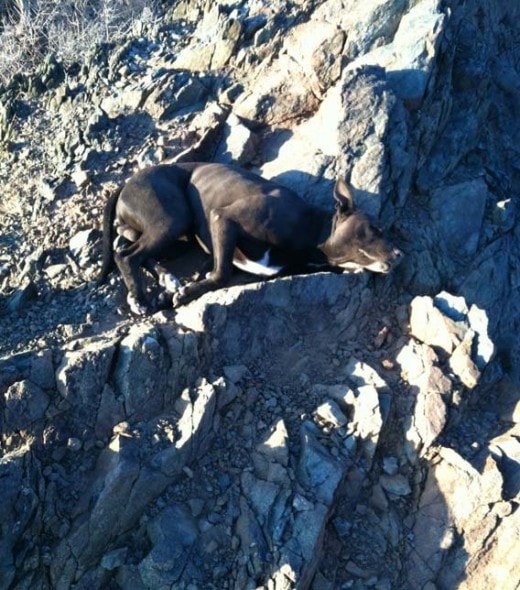 A pit bull, shot and left to die in the Arizona mountains, was rescued by a hiker who spent an hour painstakingly carrying him in her arms down the mountainside. After having him treated by vets, she brought him home to be part of the family.

Andi Davis was hiking an abandoned trail in Phoenix when she came across a dog that was at death’s door. He was trying to stand, but was collapsing, his head resting on a rock. He had bullet wounds, and it was clear that he had been left to die alone in the mountainous desert.

“I looked down and there’s this dog laying there he’s not moving,” she explained. “I realized I have two choices: I can try to help this animal or run down the mountain to try to get help.”

Andi was scared, but cautiously approached the pit bull. He lifted his head when she reached for her water bottle, and her fear lessened. She gave him a drink, and then lifted him up and started the arduous walk to the bottom.

“It will be OK,” she kept telling the 47-pound dog, who weighed heavily in her arms.

She took breaks to give him water, but kept chugging along.

But the pair made it down. Her daughter Jessi ran right over to the dog.

“Her heart melted and he looked up and gave her a kiss.”

Andi was overwhelmed by the media attention she received for her heroic rescue, and gave permission to Jessi and Bretta to help relay her tale.

“When my mom found our new dog on the mountain, my heart broke at the first sight of him,” Jessi said. “He was torn up. Everywhere.”

Andi is described as “very fit person,” but it took an hour to reach her daughter and husband at the bottom, and even a week later, her arms still ache. Once the family was reunited, they took the injured dog to be examined by vets at the Arizona Humane Society.

“I thought I would never see him again,” 10-year-old Jessi penned in a letter to the AHS. “I knew he was in good hands, but I still felt very sad.”

Doctors found a bullet lodged in the middle of his neck, and fragments near his spinal cord, along with an open abdominal wound. The dog, now named Elijah, was treated, but removing the bullet from his neck would have lead to health complications. After being held by the shelter for 72 hours in case he was claimed, he was brought home to be fostered by the Davises.

“I was so, so happy when we got to see him,” Jessi wrote. Bretta said Elijah responded to Jessi as if “they had been best friends their whole lives.”

Now Elijah is recovering from his ordeal and getting to know the family, who will most likely be a permanent one, as they feel it was meant to be, and do not want to see him go to anyone else.

“Mom has a dog, dad has a dog, I have a dog,” Jessi said. “Elijah is the family dog. Because he’s special.”

Addressing the AHS, Jessi concluded her letter by saying, “After all you have done for us, I want to help animals too. Thank you so much for making our lives better. You rock.”