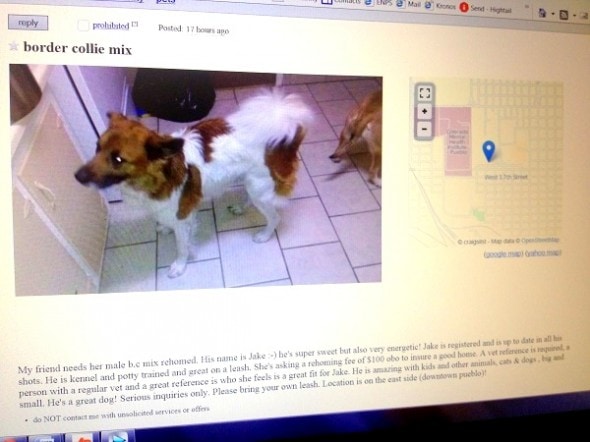 Almost every one of us dog owners has felt the panic and fear that comes along with not being able to locate the family dog.  Now, just imagine for a second surfing Craigslist, and seeing your dog for sale! That is exactly what happened to a Pueblo, Colorado woman.  Thankfully she was reunited with her boy, Mumble.

The ad was placed on Craigslist, showing a Border Collie named Jake for sale.  The problem is, “Jake,” or Mumble, what he is actually known as, already has himself a warm, caring, and loving home.

Sarah Cantano, Mumble’s owner, says he went missing Saturday morning.  She had asked her brother to watch the dog while she was away.  When she returned, her brother told her he had no idea where he had gone.

Cantano has been posting info about her lost dog for days now on social media websites.  She has also asked friends and neighbors to keep an eye out for him maybe just walking about through the area.

It wasn’t until she checked the site Craigslist that she found her lost dog, for sale “by owner.”

“Someone told me to look on Craigslist, and I did. It was the first ad. It said ‘border collie mix,’ and I knew right away that it was my dog,” Cantano said.

Cantano then began emailing the person via Craigslist, asking for her dog back.  They only responded with silence. Then, because they listed their personal email address, she began sending messages to them personally.  After much effort and many emails, the Craigslister finally gave up their address.

Police were sent to that address, and Mumble was finally returned to Cantano without incident. When asked about pressing charges, the relieved owner said only wanted her dog back, and nothing else.