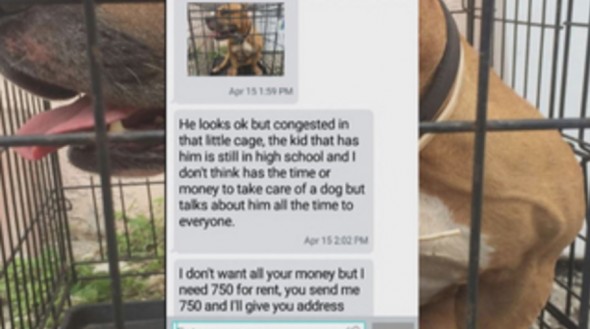 Natalie Lopez of North Miami, Florida has had her nine-year-old Staffordshire pit bull called Choco abducted from her backyard.  The people responsible for the dog-napping have started to text Lopez’s cell phone demanding a ransom payment to get her dog back.

Lopez has had Choco since he was seven weeks old.  They have a very strong bond between them, and as anyone who’s been around Staffys knows just how affectionate and attached they can get.

The incident took place early last month.  Lopez let Choco out to do his business in the backyard.  According to Lopez, this happens twice a day, every day.  So when she came back to let Choco back in, he was nowhere to be seen.

As one could imagine, Lopez immediately went out look for her dog.  She posted signs up all around her neighborhood with her name, the dog’s name, and her contact information.  About four days in, someone finally text messaged Lopez about Choco, but what was said was not easy for Lopez to hear.

“This is the first picture from the first lead I was sent,” Lopez, clutching a photograph of Choco, told Local 10 News reporter Erica Rakow.  “It’s of him in a kennel. He’s missing his collar.  They made sure not to show me anything distinguishable about the location.”

Lopez then started to get more texts, that weren’t just pictures of Choco.  There was text included saying, “Hey, I know who has the dog, but I have to figure out a safe way to get my money and you your dog.  I don’t want all your money, but I need 750 (dollars) for rent.”

Lopez actually did wire the money as instructed, but says that she got nothing back in return.  It didn’t take long for her to figure out that someone was going to bleed her dry.  Metaphorically speaking of course, but still damaging nonetheless.

“There was a second request for the reward where they basically wanted me to meet them at midnight with $2,000 cash,” Lopez said.  “They told me to send them a photo of the $2,000 next to my phone.”

Lopez had told the dog-nappers that she was no longer willing to comply with their demands.  Since doing so, they have stopped all communication with Lopez, leaving her in the dark when it comes to the fate of Choco.